Thanks, Norm Lewis, for Educating Realtors & Consumers on Lending Issues

[Published Sept. 27, 2012, in the Denver Post and in four Jefferson County weekly newspapers]


I get a lot of feedback from readers (including fellow agents) thanking me for writing this column. In fact, I probably get 90% of my business from people who read this column, which I have published in YourHub since that section’s inception year, and in four Jeffco weeklies since earlier this year.


(My readers in the Jeffco weekly newspapers might want to visit www.JimSmithColumns.com to scan some of those earlier columns which may still be topical.)


Using paid advertising space to share knowledge rather than just promote listings or build name recognition has definitely worked for me, while also satisfying my love of journalism and writing.  Frequently I have urged people in other professions to do the same. One particular industry that cries out for such an approach is the mortgage industry.


I can’t think of any industry which has become more complicated and confusing and just plain difficult than mortgage lending.  Because of all the foreclosures, many of which can be blamed on poor lending practices in the last decade, an unending escalation of regulation and oversight has befallen the mortgage industry.


As a result, more than half the loan officers who were in the business five years ago have left the business. And major local lenders, such as Clarion Mortgage Capital, have folded.


Amid this turmoil and confusion, one loan officer has been there for me and other Realtors — although he has changed mortgage companies a couple times — keeping up with the shifting landscape and doing his best to keep us informed and educated.  I’m referring to Norm Lewis of Peoples Mortgage.


Although Norm has not chosen to write a column like this, he does send out a weekly update which he writes himself and which I receive by email, and which you can receive, too. (Send your request to nlewis@epeoples.com.)


In addition to writing his Friday emails, Norm attends Realtor marketing sessions each week, where he always shares something we need to know about lending changes — and makes us glad we’re Realtors instead of loan officers!


In particular, I have learned from Norm about underwriting and how all underwriters live under the constant threat of “charge backs” — loans which the investor will force a lender to buy back because of a post-closing audit which uncovered some uncrossed “t.”  Mortgage companies depend on being able to sell their loans soon after closing so that they can use that capital to close other loans, and it doesn’t take more than one or two bought back loans to deplete a lender’s cash and force them out of business. 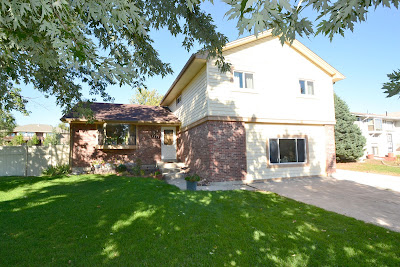 I love this home! It sits at the intersection of 3 cul-de-sacs, next to the Bear Creek greenbelt. The address is 3239 S. Newland St., Denver. The oversized 2-car garage has been converted to an oversized master suite (as you can see in the picture), and a new detached oversized 2-car garage has been added (not visible in this picture). The home features slab granite counters, new carpeting, a newly covered (and very large) back deck, and a second master suite upstairs that was created by merging two smaller bedrooms. There’s a pellet stove, large vegetable garden and fresh eggs daily! This home will make the right buyer very happy!  Take a narrated video tour of this home at www.YouTube.com/jimsmith145

The #1 Mistake of Sellers: Not Checking Out Their Home’s Online Presence

[Published Sept. 20, 2012, in the Denver Post and in four Jefferson County weekly newspapers]


I really wish every seller would do just one thing—go online and see how their home is being presented.  Most sellers know little more about the marketing of their home than how the sign looks in their yard and how the brochure (if there is one) looks in their brochure box.


I believe that the marketing of homes for sale would improve dramatically if each seller merely Googled their home address and checked their home’s online presence.


Two years ago, Metrolist, the local MLS, dramatically increased the length of description that could be written about each listing, but some agents continue to write as if they are limited to three lines of copy.  Here’s a description of a listing that I came across on the MLS just last week: “Gorg.Loc.* Fab.Hm WIncred.Bones&Character*Rare,Oversized 3car*Vaults  &Beams*Hgrms Thruout*4bedrms upstairs**HgEquitybldr*Grtofficewbkshelves*Lg.Laund.Rm*Htwaterheat*2fp*Plankflrsnfamrm*Alarm*Prime lot*Hurrywontlast!”


I can’t help but wonder whether the seller has seen this online description of their home and what they’d think. If I forwarded this listing to a buyer, I think I’d have to translate it into English first!


Pictures, when they exist at all, are sometimes of very poor quality, or a vertical picture may be uploaded sideways.  If a listing has just been entered, I can understand why there might be no pictures, but often I encounter old listings with no pictures. (Myself, I always wait until I have all pictures and video tour ready before I put a listing on the MLS.)


As a Realtor, I have an ethical obligation to alert a fellow agent to any errors in their listing, and I’ll also send a friendly email, asking the agent if he/she is aware that his/her MLS listing has no pictures. One agent, in reply, said I should look at an earlier expired listing of the house to see pictures!


Agents who list bank owned properties often cut corners, especially on pictures, knowing that their seller has never seen the house and won’t notice a poor marketing effort or minimal data entry on the MLS.  So, that’s what those listings usually get.


I’ll be criticized by some fellow Realtors for writing this column, because our Code of Ethics prohibits criticism of fellow Realtors. In this column, it could be said that I am doing just that, but I feel that I am criticizing patterns of behavior and not particular agents. I even modified that cryptic MLS description to make the home and agent less identifiable.  Wouldn’t it be nice if they thanked me instead of making ethics allegations?
Posted by Jim Smith at 5:47 PM No comments:

Homeowners Associations: Good or Bad? Here Are Some Points to Ponder


Although “covenants” have been around for decades, the concept of homeowner associations to enforce those covenants is more recent. By my observation (from reviewing title documents for numerous closings), it is primarily the subdivisions created in the 1990’s and later which have HOAs that collect dues and manage their subdivisions — and which can enforce their covenants.


The older subdivisions had covenants, but typically there was no entity created to enforce them. If a homeowner violated a covenant, a neighbor who was upset at that violation had no recourse, other than to sue in civil court.  In addition, the older covenants typically had expiration dates, such as 30 years. If, after that time, the majority of homeowners did not petition to extend the covenants, then the covenants simply expired.


When buyers look at the various homes on the market, they will often want to know about the HOA and the dues charged. Occasionally a buyer will not even consider a home which belongs to an HOA, regardless of the amount of the dues. This could be based on a previous bad experience, or perhaps the buyer has an RV or boat trailer and wants to be able to park it at home instead of paying to store it somewhere else.


The main purpose of HOAs and the covenants they enforce is to protect the property values by preventing individual properties from becoming eyesores or annoyances to neighboring properties.


Examples include keeping driveways clear of RVs and boat trailers (other than for loading and unloading), but they also include making homeowners mow their lawns, clear weeds, and keep the exterior of the house freshly painted. In my own subdivision, I have been forced to repaint my faded garage doors, remove a lawn ornament from the open space adjacent to my house, and take trash cans inside instead of leaving them next to my house. I also got a letter once saying they had reason to believe I was planning exterior changes to my house and reminding me to get permission before starting work. (I had written about my plans in this column!)


On one level, I found this annoying, but on another I thought it was reasonable and I complied. (If I hadn’t, I could be fined, and state law allows an HOA to foreclose on a member’s home, if necessary, to collect unpaid dues and fines.)


Regarding dues, these can be excessive, but in most cases they cover valid expenses such as insurance, trash removal, common area maintenance, etc. [End of column as published in the newspapers.]

If the HOA has a master insurance policy that spares you the expense of buying homeowner's insurance, that could be saving you $100 or more per month. If however, the HOA has a swimming pool to maintain and you never swim, your HOA dues may be in excess of the value you receive. You're paying for a swimming pool you'll never use. Find out what the HOA fee covers and whether you'll benefit from those covered services.

Regarding that master insurance policy, it's important to know if it covers interior walls in case of fire.  If it does, you only need to buy optional "tenant's" coverage for your personal property.  If it does not, however, you'll need to buy a condo policy which includes that coverage.

The worst thing about management companies, in my opinion, is the fees that they extract from members when they sell their home. These companies typically charge excessive fees to produce a status letter (indicating whether you're up to date on dues payments) and other HOA documents required for a transaction -- and for transferring the ownership of your home on their records.  These fees amount to as much as $300-400, and not a penny of that benefits the HOA -- it's a profit center for the management company.
Posted by Jim Smith at 10:36 PM 1 comment:

Buyers Are Still Buying in All Areas and Price Ranges

Here is my monthly gauge of market activity, first by County or MLS Area, and how it has changed over the last 11 months:


And here is my analysis by price range, with prior month comparison:
Posted by Jim Smith at 4:45 PM No comments: