You’ve Heard About Geothermal Heating, But How Does It Work, Anyway?

But you don’t need to be near geysers or hot springs to take advantage of the earth’s natural heat. Geothermal heating and cooling using a heat pump is available everywhere, and you can expect to see it increasingly utilized in coming years. The best gas forced air furnaces are now 98% efficient, but a geothermal heat pump system can operate at a quarter the cost of the best such furnace.
People who explore caverns know that the temperature below the earth’s surface in our latitude is about 55 degrees. Geothermal heating and cooling involves circulating a liquid such as glycol through pipes deep under ground to bring that 55-degree temperature into a heat pump. The heat pump runs on electricity, which means you could heat your house with solar power  — a perfect marriage of renewable energy.
Heating entails extracting heat from the 55-degree glycol and pumping the chilled glycol back into the earth where it returns naturally to 55 degrees. Again, you can find instructive YouTube videos explaining the process. Domestic hot water can be created the same way, eliminating the need for the typical gas hot water heater.
Cooling requires even less energy than heating, since the glycol coming out of the earth is already at 55 degrees. 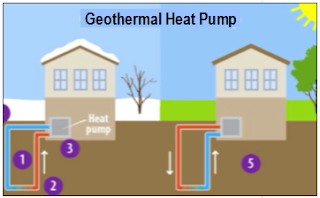 The diagram at right shows a heat pump drawing heat from the earth in winter and drawing coolness from the earth in summer.
Although it’s common to drill vertical pipes a couple hundred feet into the earth, it’s also possible, at our latitude, to lay horizontal pipes just 6 feet or so below the surface, if you have a wide enough area.
Installation of a geothermal heat pump system is most practical with new construction, but I saw it done as a retrofit for an older home in Golden’s Applewood neighborhood, using horizontal pipe which was buried across their backyard.
Last October, the Golden Solar Tour featured a new home development under construction in northwest Arvada called the Geos Community. This community will include 300 homes using geothermal heating combined with solar power to create homes which require no externally generated electric power or natural gas — even powering one electric car per household from solar power. I produced a 12-minute video interview with the developer, which you can view on YouTube by searching “Geos Community.” (Click here to view it.)
Geothermal heat pumps are also called “ground source heat pumps.” Such a system can cost $20,000 or more to install, much of that for drilling/excavation. A more affordable solution is what’s called an “air source heat pump” which operates on the same principle, but instead of drawing heat out of the ground, it draws heat from the outside air. They are so efficient now that they can extract heat from air as cold as minus 14 degrees Fahrenheit. I have one in my house, but in the five years since it was installed, more efficient models have come to market. Google “mini split heat pumps” and you’ll be amazed at the low prices, such as $3,300 for a mini split heat pump with four wall mounted interior units. With such a unit, you can eliminate a gas furnace completely.
This article is by necessity a somewhat simplistic description of geothermal heating and cooling, so I urge those in a position to consider such an installation to 1) Google the subject for more detail and 2) consult a company in the business of installing geothermal (or mini split) systems to see if such a system would make sense for you.

Our Google Listing Now Includes an Interior Tour of Our Office 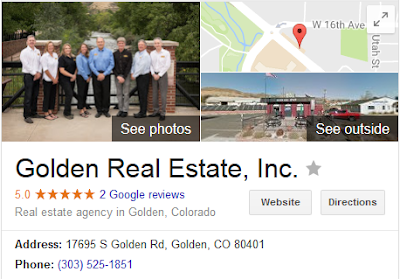 We’re proud of the fact that our website is the #1 unpaid listing when you Google “golden real estate,” but now our listing has been enhanced with interactive pictures (called a “Google Business View”) created by Mediamax Photography Agency.  Mixed in among other still photos, you’ll find pictures of our office and parking lot which you can rotate using your mouse, showing myself and two other agents at work. It’s pretty cool!  Thanks, Mark Schow, Mediamax owner!  Here's a link:

Golden Farmers’ Market Opens Saturday...and Golden Real Estate will have a booth there! 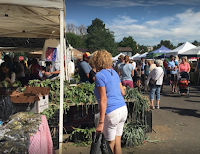 It’s an annual tradition. As a long-time member of the Golden Chamber of Commerce, we are given the opportunity to have a “showcase” booth at the Golden Farmers’ Market, which takes place in the parking lot next to the Golden Public Library on 10th Street in downtown Golden.  This is one of the state’s highest rated farmers’ market.  Come say hello on June 3rd, 8am to 1pm.