Cheap Electricity from Renewable Sources Is Revolutionizing the Utility Industry

There’s a revolution happening in the energy business.  Earlier than many experts predicted, the cost of electricity from solar, wind and other renewable sources is dropping to where it is now competitive or even cheaper than electricity created from coal and gas.  And this is happening at a time when the cost of fossil fuels has also plummeted.

One of my favorite online news sources is Renewable Energy World, which posted an article last week about this month’s DistribuTECH conference in Orlando, which is described as “the largest annual power delivery conference & expo in North America, covering the utility industry from end to end."
In their keynote speeches, David Pogue, the noted technology columnist for the New York Times, and Michael Liebreich, founder and chairman of Bloomberg New Energy Finance, described how the cost of wind and solar electricity has dropped worldwide to under 6 cents per kilowatt-hour, prior to subsidies, and that the technology is now unstoppable — despite the efforts of the Koch brothers to stop it. “You can’t put this genie back in the bottle,” Pogue said.
By comparison, Xcel Energy sells electricity to us for about 11 cents per kilowatt-hour.
The cost of installing home solar PV systems has dropped to the point where Xcel and other utilities are asking their state regulators to eliminate net metering and reverse programs which reward homeowners for installing such systems. They’d like to start charging extra to connect solar PV systems to their electric grid.  The utilities fear that if enough people start generating their own electricity and use their grid connection to get free storage of daytime excess production, there won’t be enough ratepayers to support the grid itself.
Meanwhile, recognizing the efficiencies of wind and solar generation, Xcel and other utilities are building their own utility-scale solar and wind farms.  They are also replacing coal-fired plants with ones using natural gas. Recently I toured Xcel’s Cherokee generating station north of downtown Denver, where three out of four coal-fired generators have been retired and two gas-fired generators put online.  The advantage of natural gas is not only that it pollutes less, but that it can be ramped up more quickly than coal.  It’s a great companion for solar and wind, because those forms of power can fade quickly based on weather, and a natural gas plant has the ability to make up any drop in power quicker than coal.
In his speech at DistribuTECH, Liebreich predicted that by 2040 the U.S. will derive 24 percent of its electricity from renewables, compared to only 4 percent today.  Germany already produces 16 percent of its electricity from renewables, but that will rise to 77 percent by 2040, Liebreich said.
Another revolution is happening in the storage of electricity —  batteries.  As the price of batteries drops below $100 per kW-hour, the cost of manufacturing electric cars will become less than the cost of manufacturing cars with internal combustion engines.  That means that the 70-kWH battery in a Tesla (giving it a range of 240 miles on a full charge) will drop to less than $7,000. This drop will allow electric cars with 200-mile ranges to cost $30-40,000 starting later this year with the Chevy Bolt and next year with the Tesla Model 3.
Some analysts have predicted that the low cost of gasoline — which is expected to continue for a long time — will cause the death of electric vehicles (“EV’s”).  This argument ignores the actual cost of operating EV’s.  Low gas prices have reduced the cost of driving to about 10 cents per mile (based on $2/gallon gas and 20 mpg).  But the cost of driving an EV has always been about 4 cents per mile, and maintenance costs are ridiculously small — no oil changes, no transmission to service or repair, no exhaust system, no emission tests, no timing belt, no fuel pump, etc.  The list of repairs not required on EV’s goes on and on.  EV’s don’t even require new brake linings as often, because the electric motor becomes a generator when you release the accelerator, recharging the battery while slowing the car.
As the sale of EV’s takes off this year and next, there will be a demand for more electrical generation, and that demand will be met primarily by renewables.  Homeowners will put enough solar panels on their homes not only to power their homes but to refuel the EV in their garage.  And for now, residential solar installations are supported with a 30% federal tax credit, and the EV purchase earns up to $13,500 in additional federal and Colorado tax credits.  (Note: These tax credits won't last forever -- be an "early adopter"!)
Low-cost battery storage will also make it attractive for homeowners with sufficient solar capacity to go off-grid and store daytime solar generation in a battery (such as the Tesla Powerwall).  If the PUC were to eliminate net metering, making that investment in battery storage would be a logical decision. My guess, however, is that the PUC may raise the cost of net metering a little but not enough to cause utility customers with solar panels to abandon the electrical grid in favor of battery storage.

Check out this more in-depth article about the keynote session published by Electric Light & Power.

Is Your Home Off the Electric Grid?

A television producer has asked us to help him find one or more Colorado homes that are “off the grid” to feature on a TV program called “Unplugged Nation.”  If your home is not connected to the electric grid, please contact Jim Smith at 303-525-1851 or Jim@GoldenRealEstate.com, so he can put you in touch with the producer.

Learn more about Unplugged Nation on their Facebook page. 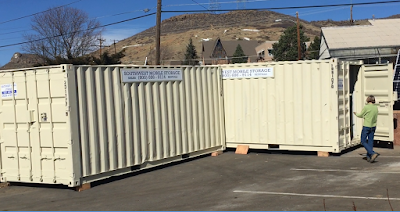 Last week the Golden Optimists Club had these two containers installed at the north end of Golden Real Estate’s parking lot. The Optimists will use them to run their renowned Bicycle Recycle Program, previously operated out of Heritage Square. The club refurbishes donated bicycles and offers them free to those in need of affordable transportation.  The program is a suitable extension of Golden Real Estate’s commitment to sustainability.

Read more about this program on the Golden Optimists' website.