If the Senate Were to Use a Secret Ballot, It Would Likely Convict Trump Unanimously

If I were a Republican Senator hearing the House Impeachment Managers describe the death threats suffered by Republicans (and their families) when they “turned against” President Trump, I would realize that I must acquit him so that my family and I don’t suffer the same fate. This is no small matter.

Consider Georgia’s Republican Secretary of State who received death threats. Or Mike Pence — Trump’s most loyal lapdog — who was targeted for execution within minutes of his refusal to violate his constitutional duty to certify the Electoral College votes making Joe Biden our 46th president.

Also, consider the executive at Dominion Voting Systems responsible for programming, who went into hiding because of death threats based on lies that he had programed the company’s machines to change Trump votes to Biden votes.

Going alone is too scary for Republican senators. The only hope, I believe, is for Mitch McConnell to caucus with his Republican colleagues and convince them as a group to vote to convict the president and preserve their own honor. Better yet, agree to a secret ballot if possible, which I believe would assure conviction.

I remember thinking before Trump’s 2016 election that his candidacy would likely destroy the Republican Party. It took four years, but I think that time has come — unless the party can bring itself to repudiate Trump en masse. God knows, they have the justification to do so.

How will the ex-president’s incompetent lawyers respond to the presentation they have seen by the House Impeachment Managers? I see two possibilities. One, they will say, “We haven’t seen anything we didn’t already know,” and rest their defense immediately, hoping for a quick vote to acquit. The second possibility is my favorite: Trump will fire his lawyers and insist on representing himself. That would, of course, be stupid, but he has never exhibited great smarts, as the incitement of insurrection itself demonstrates. So maybe he’ll do that. One can only hope.

Surely, Mitch McConnell does not relish the idea of Trump being his president and leader four years from now. How could he?

What aggravates me the most is when I hear Ted Cruz and other defenders of Trump say that convicting him would be an affront to the 74 million people who voted for Trump. Not all of those voters wanted the Donald Trump who incited the insurrection.  But it is surprising that the majority of Republicans, according to polls, still believe Trump’s claim that he won the election despite the lack of any evidence to support it.

My hope is that Trump’s support will diminish over time, not just because of the insurrection but because of how refreshing it will be to have competence returning to the White House and the cabinet. It’s notable that Biden’s approval rating has been above 50% from day one, whereas Trump never reached that mark in his four years.

Of course, multiple indictments in New York and elsewhere, plus more bankruptcies, will tarnish his phony reputation as a business genius. Conviction and jail time can’t help him either, and both are certainly possibilities.

There was a great column by Colbert I. King in the Washington Post on Feb. 5th. The title is “D.C.’s police came to the rescue. Its taxpayers still aren’t allowed a vote in Congress.” According to King, the District didn’t get so much as a thank-you, much less reimbursement, for coming to the rescue of the Capitol Police and — it’s fair to say — saving lawmakers’ lives.

At its height, 850 Metropolitan Police Department officers came to the Capitol building, and 65 of them suffered injuries. “Some went home with bruised and sprained limbs, broken noses, Taser injuries, concussions, and damaged lungs caused by chemical irritants and bear spray,” according to the article.

The point King makes has been made for decades on the District’s license plates — “Taxation Without Representation.”  I remember when the District released this design, the president was a Republican — Reagan, I believe — and the response was that White House vehicles which had always had DC license plates were suddenly switched to having federal license plates!

You see, Republicans would never support statehood for the District, because it would guarantee two more Democratic Senators and one or two Democratic representatives. After all, what is more important to a politician, advancing democracy or staying in power?

Democrats, of course, promote statehood because it advances their political position, but also, I like to think, because it advances democracy. I have long promoted a compromise which would still provide District residents with representation in Congress, and that is to reduce the District of Columbia to those parcels that are owned by the federal government and to have all residential areas returned to Maryland, just as the western part of the 10-mile-square district was returned to Virginia 45 years after the District’s creation in 1801. This would not grant residents their own representation in the Senate, but it would provide one or two more representatives for the state of Maryland. The city would change from being Washington DC to Washington MD. The city would have home rule, but it would no long have its own license plates. The White House would still be in the District of Columbia and keep its federal license plates.

Getting back to the insurrection, the Washington Post reported in a Feb. 10th article by Todd C. Frankel that, “Nearly 60 percent of the people facing charges related to the Capitol riot showed signs of prior money troubles, including bankruptcies, notices of eviction or foreclosure, bad debts, or unpaid taxes over the past two decades, according to a Washington Post analysis of public records for 125 defendants with sufficient information to detail their financial histories.”

The article continues: “While no single factor explains why someone decided to join in, experts say, Donald Trump and his brand of grievance politics tapped into something that resonated with the hundreds of people who descended on the Capitol in a historic burst of violence.

“ ‘I think what you’re finding is more than just economic insecurity but a deep-seated feeling of precarity about their personal situation,’ said Cynthia Miller-Idriss, a political science professor who helps run the Polarization and Extremism Research Innovation Lab at American University, reacting to The Post’s findings. ‘And that precarity — combined with a sense of betrayal or anger that someone is taking something away — mobilized a lot of people that day.’ ”

We have a lot more to learn in the coming months about the insurrection, including why the Capitol Police were so ill prepared for it despite ample intelligence.

There is a facinating story published in the Washington Post today recounting the story of Julia Chinn, who bore two children to our 9th Vice President, Richard Mentor Johnson of Kentucky, but died of cholera four years before Johnson took office.  He put her in charge of the plantation when he was away, yet he never granted her freedom.  He couldn't marry her legally, but they were married in a family ceremony in a black church.  His two daughters married white men and their descendants denied their heritage for over a century. It's a fascinating story.  Here's a link to the Washington Post story.

He's also the only Vice President who didn't received the necessary electoral votes, unlike President Martin Van Buren, and was voted into office by the Senate.  Although Southern newspapers decried Johnson as "the great Amalgamationist," he succeeded politically in large part as a hero of the War of 1812, in which he was shot five times in a Canadian battle where he killed Chief Tecumseh.

Here's a link to a short video about Julia Chinn from KET. org.

I wouldn’t do justice by merely quoting from the two articles I just read on Slate.com. I urge you to subscribe to Slate Plus, as I do. The first article by William Saletan, published on Slate.com on Feb. 4th is entitled Trump Didn't Believe His Election Lies: His trial can prove it. The 2nd article, also by Saletan, published on Feb. 2nd, is entitled Trump Destroyed Himself: Two reports by his own pollsters show why he should have won but didn't. The blue type in the PDF linked below are hyperlinks, so look for the articles on Slate.com if you want to click on them. 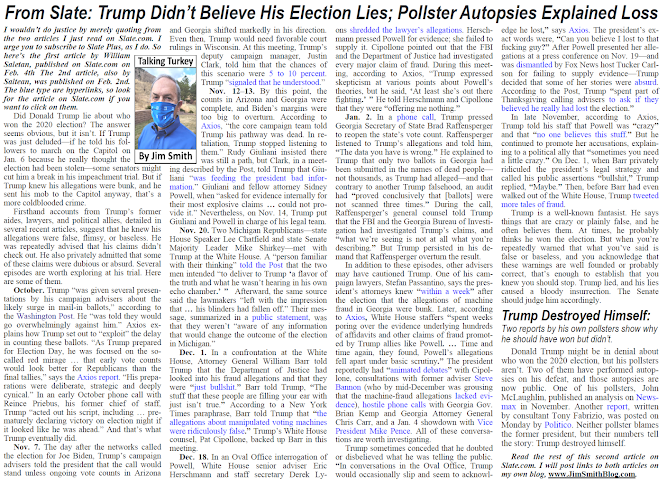