Although individual real estate agents like to keep their political opinions to themselves, the state and local Realtor associations do take an active interest in ballot measures, especially ones which could impact property rights and the real estate industry.

This year, both the Colorado and Denver Realtor associations have taken positions on Amendments 69 and 71 and on Propositions 107 and 108.

Regarding Amendment 69, also known as ColoradoCare, the Realtor association urges a “No” vote. Not only does it impose a 10% tax on real estate commissions (and on passive income, including rents and the sale of investment properties), but it risks driving businesses out of Colorado, which would strike a serious blow to employment and the economy. The tax increase to support this single-payer health insurance system would by itself more than double our state’s budget and catapult Colorado to having the highest income tax in the country.

In addition, the Realtor association, like others, is concerned that the 21-member board created to manage ColoradoCare is unaccountable as it negotiates prices, decides coverages and reimbursement rates, and even increases its tax rate without voter approval.

Personally, I was a big fan of Bernie Sanders’ Medicare-for-all approach, and I know Bernie has campaigned for Colorado to take the lead by passing Amendment 69, but I agree with the Realtor associations that this would be a big mistake. If America is to get a single-payer healthcare system (like Medicare, but covering everyone), it needs to be done by Congress, not by an individual state like Colorado, in order to be fair and not economically disruptive.

Amendment 71 is the amendment that “raises the bar” on future constitutional amendments. The Realtor association urges approval. Perhaps you, like me, have wondered why it takes the same simple majority vote to approve both a statutory law and a constitutional amendment in Colorado. This make no sense.  By contrast, our federal constitution requires a two-thirds vote in Congress plus ratification by two-thirds of the state legislatures.
Under present rules, the petition requirements to put a constitutional amendment on the ballot is the same as for a simple law, and both require only a simple majority of the voters. A law passed by voters can be repealed or modified by the legislature, whereas a constitutional amendment can only be modified or repealed by a subsequent amendment.
Remember how Mr. Khan pulled a copy of the U.S. Constitution from his pocket and offered it to Donald Trump? He’d need a briefcase to hold a copy of our state constitution, and it gets bigger all the time.
Propositions 107 and 108, which the Realtor associations support, create a state primary for elections and allow the one-third of voters who are unaffiliated to participate in the primary of their choice. (The caucus system would remain for choosing party leaders on the precinct level.) By including unaffiliated voters in the primary, it is believed that the winners of each party’s primary would be less likely to be from their ideological fringes.
The Denver association declined to endorse school board measures 3A and 3B (as I do) but has endorsed the renewal of the SCFD sales tax, which amounts to 1¢ on a $10 purchase.  You won’t miss that penny, but collectively it makes a huge contribution to the artistic and cultural institutions of the metro area, which only enhances property values.
Consistent with its support of the Jefferson Parkway boondoggle, the Denver Realtor association has endorsed both incumbent Jeffco Commissioners. I prefer Marti Smith, who opposes it, over Libby Szabo.
You’ll want to vote early, because that will put a stop to the phone calls you might receive from campaigns soliciting your vote.

Published Oct. 27, 2016, in the YourHub section of the Denver Post and in four Jefferson County weekly newspapers.  It has been edited for accuracy concerning ballot issues 3A and 3B.

Now that we’re approaching winter, what can you do to reduce your heating bill?

Dollar for dollar, your best expenditure is not on more efficient heating, it is on better insulation so your furnace doesn’t run as much.

My very favorite form of insulation is blowing cellulose into exterior walls.  Even if your exterior walls are insulated, the chances are that the insulation has settled over time.  The older the house, the more it has settled.  When I owned a 1945 bungalow back in 2002, I hired About Saving Heat (Dennis Brachfield, 303-378-2348) to blow insulation into its exterior walls. Their website is www.AboutSavingHeat.com. I’m sure I saved on natural gas, but what struck me was the feeling of warmth that resulted from that simple and cost-effective move.
That’s when I realized that it’s not just about air flow, it’s what I think of as “radiational cooling.” In other words, when walls are cold because they are poorly insulated, they radiate that coldness, just as a hot surface would radiate heat. It’s not something you feel as much as you experience. After the insulation was blown in, that bungalow simply felt warmer.
Imagine two rooms, each with air temperature of 70°. The room with cold walls will not feel as warm as the room with well-insulated walls.
Regarding air flow, I’m surprised that most new home builders continue to stuff fiberglass insulation into the rim and band joists of homes without encapsulating that fiberglass in plastic.  I’ve found only one builder, Meritage, that uses closed-cell foam, which is even better than encapsulating the fiberglass in that critical part of a home’s “envelope.”
The rim and band joist is the top of your concrete foundation, on which your floor joists rest. Go to your basement and look for it. Do you see uncovered fiberglass insulation? It’s doing nothing to keep out cold air. I hired GB3Energy (Bill Lucas, 970-846-4766) to perform this and other weatherization tasks on my current home. Their website, www.gb3energy.com, features a video tour of my home made when it was on the Golden Tour of Solar & Sustainable Homes in 2012. Starting 3½ minutes into that video, Bill takes over and describes this and other weatherization improvements he made on my home.
Your best first step is to have Bill or Dennis or another approved vendor perform an energy audit, which includes a “blower door” test on your home. Xcel will rebate 60%, up to $200, of the cost for that audit, from which you’ll know exactly where any outside air is entering your home and therefore where you could benefit from caulking, sealing and other measures.
If you order any weatherization improvements as a result of the energy audio, you will earn a 10% federal tax credit up to $500 on each individual improvement, as well as on Energy Star appliances, but that tax credit expires on December 31st, so this fall is the perfect time to consider such improvements. For specifics on federal tax rebates for all kinds of sustainability improvements, visit www.EnergyStar.gov.
Xcel also offers rebates, including 100% on the first $800 you spend on wall insulation if you’ve had an energy audit. I suggest calling Bill or Dennis for a free consultation. Tell them I sent you!

Published Oct. 27, 2016, in the YourHub section of the Denver Post and in four Jefferson County weekly newspapers. 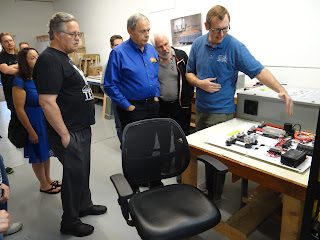