Denver’s 5280 magazine is noted for its reviews of restaurants, doctors, surgeons, dentists and other professionals. But one profession the magazine doesn’t rate is real estate agents.

This may come as a surprise to you because so many real estate agents, including Realtors, boast that they have been named “Five-Star Professionals” by 5280 magazine.  How can that be?

Every September, this magazine publishes a multi-page advertising supplement from a Minnesota company which claims to have received consumer nominations for top real estate agents and mortgage brokers. They then solicit those agents for display ads ranging from 1/14th of a page ($445) to a full page ($4,695). That’s according to a 2012 price list. If you don’t pay for a display ad, they just list you with no contact information. Agents who buy the display ads get to write the copy themselves, without editing by the magazine.
It’s a win-win for everyone except buyers and sellers. 1) The magazine gets to sell a large number of advertising pages without any production costs other than printing. 2) The Minnesota company makes a lot of money on the upsells (which also include plaques for your office and the right to use the Five Star logo in your advertising), and 3) the agent gets to claim he or she is a “5280 Five Star Professional.”
I’ve been writing about this scheme since 2013, because I consider it unethical and possibly illegal for an agent to represent that he or she is an honoree of the magazine, when they merely appeared in a paid advertising supplement. It would be like me claiming to be a Denver Post columnist because this column appears in that newspaper. I would never do that. Instead, I only say that I write a column which is published in the Denver Post and in four weekly newspapers.

What would you think if I named certain Realtors (who paid me lots of money) “Elite Realtors” and profiled them in a multi-page advertisement in the Denver Post, and let them promote themselves as “Denver Post Elite Realtors.” That’s no different than agents calling themselves “5280 Five-Star Professionals.” 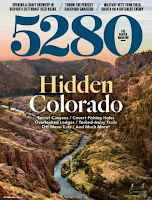 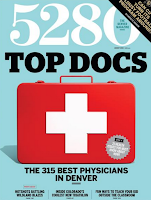 Those agents who are Realtors (members of a Realtor association) are, in my opinion, violating the Realtor Code of Ethics when they claim they were “named” a Five-Star Professional by this highly respected city magazine which does name top doctors and surgeons. As you can imagine, the magazine expends considerable editorial resources in selecting those medical professionals before printing their names and writing their reviews. (The doctors and surgeons don’t write their reviews!)  Those “Top Doctors” are profiled in the August issue, and it’s the main headline on that issue’s cover (left). By contrast, the September issue of 5280 (right) containing the Five-Star ad  supplement doesn’t mention it on the cover or in the magazine’s table of contents, or even on the magazine’s website — because it’s only an ad!
As a journalist, I’m upset that a magazine would permit an advertiser to trade on its name and reputation in this manner. I think advertisers should only say “As advertised in 5280 magazine.”  Instead, you and I find agents promoting themselves as “5280 Magazine Five-Star Professional in 2012, 2013, 2014, 2015 and 2016!” or even “Named a Five-Star Professional by 5280 Magazine.” It’s simply a deception, a misrepresentation and a violation of the Realtor Code of Ethics.
I have been complaining about this scheme since 2013 and no one has acted on it — except one Realtor who filed a Code of Ethics complaint, claiming I violated the provision of the Code which prohibits speaking ill of other Realtors. I was disappointed when the ethics panel found me guilty as charged!