I recently moved into a wonderful new (actually 10-year old) home in Stonebridge at Eagle Ridge.  It backs to Lookout Mountain open space, and Rita and I both love it.


Of course, a home is never perfect, so I undertook a number of quick, relatively easy improvements that I’d like to share with you.


First and favorite was to have my plumber install a hot water recirculation line so that I would have instant hot water at the farthest (kitchen) faucet and every faucet between it and the water heater. Now, when I turn on the kitchen hot water, it’s hot after drawing 1/2 cup water. In the master bathroom, I have to draw a bit more before it’s hot.  Cost: $500.


While the plumber was here I had him install a hot and cold water faucet in the garage.  $200.


I installed a photocell on my porch light so that my porch and driveway are always lit up when it’s dark.  $10 (part cost only).


I ordered a 9.75 kW solar system, as described in last week’s column. $11,000 upon installation to get free electricity forever.


My furnace needed replacing anyway, so I bought a Carrier Lightspeed air-source heat pump with matching gas furnace which will only fire up when it’s below 20 degrees outside. This way I’ll heat my home with my free electricity except on really cold days.  Not cheap, but a great investment: $15,000.


My driveway has that terrible “mountable curb” which is so typical of subdivisions. For $2,400 it will be removed and a smooth driveway entry will be installed.


My garage has no natural light, so I’m having a Solatube installed there and in a dark interior hallway. $500 each, including installation.

What are YOUR favorite home improvements?

In my column about solar PV in today's Denver Post, I raised a question about whether leasing companies might be liable for "Business Personal Property Tax" on the PV systems which they own during the 20-year lease.  I asked Rep. Max Tyler about that, and he said that two years ago the state legislature passed a bill, HB-10-1267, which exempted these systems from property tax.  Whew!
Posted by Jim Smith at 1:05 PM No comments:

Look How Much the Cost of Installing Solar PV Has Dropped

Last week I wrote about how your best deal on solar is to buy a house with an existing solar installation, because these homes do not sell for much more than homes without solar.


However, I recently moved from my solar-powered home in Fairmount to a home in Eagle Ridge with a great south-facing roof but no solar features. Naturally, I have looked into having a solar photovoltaic system installed and was pleasantly surprised to see how much the cost of doing so has plunged.


Nowadays, hardly anyone purchases outright a solar PV system for their home because leasing is so much more attractive financially. Here are the options that were presented to me for installing a 10 kW system on my home by three different companies. (I am using round figures, roughly averaging the prices quoted by the three vendors.)


Leasing includes maintenance and repair, so if the inverter dies in year 10, you pay nothing to replace it under a lease, but you pay the full cost of replacing it if you purchased the system.


This looks like a no-brainer and explains why the vast majority of homeowners are opting for the lease.


So why is leasing so much cheaper than purchasing, especially if you can afford to pre-pay the full lease amount up-front?


The answer, I found, is in the accounting. The leasing company gets all the rebates and tax credits for the installation plus they are able to depreciate the system, which the homeowner cannot do. (On the other hand, they probably owe business personal property tax on each installation.)


Whatever the reason, it makes sense for any homeowner with a decent south or southeast-facing roof to have a leased solar PV system installed on their home. Even with the monthly lease plan, you’ll pay less to the leasing company than you’d pay to the utility company, and you’ll be contributing to a more sustainable, less polluted environment. I’m having a 220-volt electric charging unit installed with the system so I can charge my Chevy Volt, too.
Posted by Jim Smith at 10:42 PM No comments:

Own This Home and Enjoy Free Electricity

This home’s 7.2 kW solar photovoltaic (PV) system (barely visible in this backyard picture) meets all of the electrical needs of the seller and will probably meet your needs too. You’ll pay just $7 per month to be connected to the electrical grid. Inside, you’ll find a spacious home with two master suites, a family room which doubles as a home theater, hot water baseboard and radiant floor heat, dimmable LED can lighting, radon mitigation, hardwood and tile flooring, and more.  It sides to open space and backs to agricultural land. Very quiet!  It’s at 16488 W. 55th Drive. Take a narrated video tour at www.JeffcoSolarHomes.com. Open Saturday 1-4 p.m. 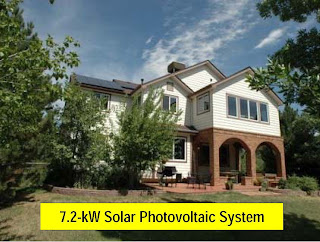 Home Builders Lead the Way on Solar, But You Might Get it Free on an Existing Home


Last week I attended an expo of new home builders and was impressed at the emphasis on sustainability, including solar-equipped or solar ready homes.


Most of the builders were promoting their “green” features and their low HERS scores.


Meritage Homes is clearly the leader in building energy efficient homes, claiming such distinctions as “First Energy Star Production Builder,” “First Net-Zero Production Builder,” and “First Builder with Community HERS Rating Under 40.”  None of the other builders I met at last week’s expo were quoting HERS scores under 60, but all were boasting many “green” features and some were building homes with solar photovoltaic (PV) systems.


Meritage is not currently building anywhere in Jefferson County, but has a half dozen communities in Denver’s southeast suburbs and another half dozen in the northern suburbs. You can find them online at www.MeritageHomes.com.


Most buyers of existing homes are impressed by kitchens, bathrooms, stainless steel appliances (forget Energy Star ratings), hardwood floors, slab granite, etc., and are, for the most part, unimpressed by sales pitches such as for the solar-powered home I have listed at 16488 W. 55th Drive.  (Tour it only at www.JeffcoSolarHomes.com) .


The result of this disinterest, which I’ve complained about before, is that homes with solar systems and other energy features are selling for no more, and sometimes less, than homes without such features.


My solar-powered home mentioned above, for example, is priced competitively with homes which do not provide their owners with free electricity, even though that represents a savings of thousands of dollars per year to the homeowner.


Because of this disinterest, I tell those who are interested in solar, “Don’t install a PV system on your current home — buy an existing home with solar and you’ll get it free!” As a PV booster, I hate to say it, but it’s true. Sellers recoup little, if any, of their investment upon resale. They only recoup their investment by staying put and paying little or nothing for electricity.

I'm a big fan of eContracts, but look at what passes for a "signature"

A few months ago, I wrote about the greatly increased use of electronic contracts and electronic signatures. I myself have adopted “eContracts” as my primary software for creating real estate contracts.


Let’s say, for example, that I need to amend a date on a contract to buy and sell real estate. Using CTM eContracts, the official contract software of the Colorado Association of Realtors, I can create that amendment in about one minute and, in another minute email it to my client and to the agent for the other party. If the other agent forwards it immediately to his/her client, and clients on both sides of the transaction are at their computers, I can (and often do) have that document legally executed by all parties in less than five minutes.


It’s a very eco-friendly technology, because none of the parties involved ever needs to print out the document. Except for the fact that most of us end up printing all these documents for our files, such technology has brought us quite close to the elusive “paperless transaction.”


I have just one gripe about it, and that is the recent introduction of using “fonts” to create one’s signature. To demonstrate what I’m talking about, I created a simulated document which my wife, Rita, and I have signed electronically.  I signed it by using my mouse, and she signed it by selecting a font (or typeface) and then clicking “Save.”

And here is what Rita’s font signature looks like:

Like Rita, it's much prettier... but Rita didn't "sign" it. I signed it for her by selecting a type font.  I didn’t even have to type her name. I just clicked on the font option, and the full name appeared in the signature box. Anyone could have done that, and it would have looked exactly the same. Knowing this, it would be hard to defend such a signature in court.


The Colorado statute governing electronic signatures says that the signature must be “unique” and capable of “verification,” and that it is under the “sole control” of the signer.  It is hard to believe that using fonts for signatures meets any of those requirements.
Posted by Jim Smith at 11:32 PM No comments:

Real Estate May Be Slow Nationally, But Front Range Buyers Are on a Tear

I’m always trying to develop new metrics — new ways of analyzing our local real estate market, especially when what I’m seeing and experiencing here is so different from the picture painted in the national (and Denver) media.


Below are two such metrics that I devised in the last six months. If you look at the changes over time for both metrics, you really get a sense that our market has sprung back to life, despite national reports to the contrary.


Developing such new metrics is made easy by Metrolist, Denver’s MLS, which has created an advanced search capability under “Prime Access” that allows unlimited search combinations. 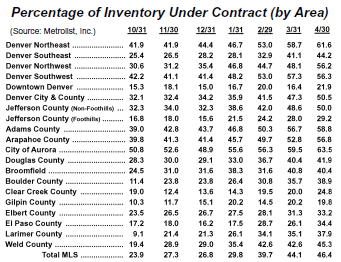 NOTE: A higher-resolution image of these tables is posted at www.JimSmithColumns.com.
Posted by Jim Smith at 10:27 PM 1 comment: