Democracy Is Looking More & More Like an Experiment -- That Could Fail

As a Baby Boomer, I grew up taking democracy for granted, sort of like how a fish takes water for granted. We elected class presidents in school. We held mock United Nations meetings. Every public office was either elected or appointed by elected officials.

In school we had classes in civics. We learned how democracy came about, how it works, and about other models that oppose democracy. We also studied the religions of the world, even in parochial schools.

Elected officials were “public servants” whose tenure was based on maintaining the confidence of voters. Although there were party labels, each legislator voted in a deliberative atmosphere not dictated by his party leaders. "Party-line votes" were less common.

There were more romantic comedies and fewer action and horror movies. There were far fewer guns and much less promotion and acceptance of them.

When Ben & Jerry’s ice cream was founded in 1978, it had a policy that the highest paid executives should be paid no more than five times the lowest paid workers.

Racism, we now realize, was systemic, but hate crimes were rare because political leaders did not embolden those with racist attitudes to act them out in violent ways. The KKK and other white supremist groups existed but they were in the shadows, not recruiting others by appealing to latent racist feelings that we would be embarrassed or afraid to voice publicly.

It felt right to us, and our country was a model for the world. By the late 20th Century, democracy was ascendant, or so it seemed. The “American way of life” was peaceful, honest, rewarding to hard workers, and above all it felt fair. Anti-trust legislation had “busted the trusts,” and unions — the honest ones — built up the middle class, raising wages across the board within a democratic framework.

But life has changed, hasn’t it?

Those who earned or inherited millions of dollars have figured out how to buy democratically elected legislators and get them to vote based on personal interest (campaign donations and more) rather than based on the public good.

They became masters at manipulating the middle and working classes to vote against their financial interests in exchange for promoting their inner prejudices. Fear, they learned, was the best tool for gaining the support of people while working against what used to be their needs and wants. They were able, for example, to sugar coat massive tax cuts for the rich with minor tax cuts for those in the lowest tax brackets.

The Citizens United decision by the Supreme Court legalized unrestricted political donations by corporations, giving us what we have today — a Congress which is owned lock, stock, and barrel by the National Rifle Association, voting against policies like universal background checks which most Americans, including NAR members, support. Why? Because the NRA has been bought, lock, stock, and barrel, by the manufacturers of guns.

Ben & Jerry’s abandoned its five-to-one ratio policy in 1994 when it recruited a new CEO. Today, it’s common for the pay of a CEO to be several thousand times the pay of line workers for the same company — and to get a bonus even when the company is suffering financially and laying off workers. The income gap between rich and poor is obscene now, a condition that in previous times would have led to revolution.

During the French Revolution, Marie Antoinette, when told the peasants had no bread, famously said, “Let them eat cake,” showing how out of touch royalty was. Today it’s different. Certain leaders act on the knowledge that constituents will even suffer hunger if you appeal to their fears of minorities, of crime, and of “socialism,” ignorant of how socialism might serve them.

It’s clear to many now, including me, that the “American Experiment” is just that — an experiment. And experiments can fail. Ours appears to be failing due to the manipulated ignorance of the general population, exacerbated by the death of local newspapers and the purchase of big city dailies by hedge funds interested in profit, not in serving the public good.

My thanks to the readers who support this column through my GoFundMe campaign at www.FundTalkingTurkey.com.

We all get tired of watching politicians read prepared remarks on a Teleprompter. Who wrote it, we wonder?  So it's refreshing to see how competent the president is in a totally unscripted situation not intended for broadcast.  President Biden really showcases his intelligence, knowledge of American history, and competence in this interview with Heather Cox Richardson: 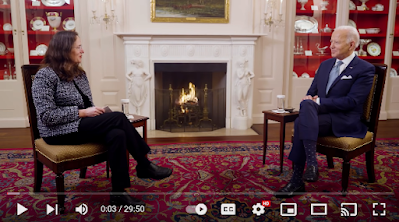