Today, June 29th, is being noted as the 10th anniversary of when Apple began selling the iPhone, which Steve Jobs had introduced with great fanfare on Jan. 9, 2007. There’s no question the iPhone changed our world forever, but, while the iPhone’s introduction may be the best known technology-related event of 2007, many other things happened during the 12 months, before and after that date.

In chapter 2 of Thank You for Being Late titled “What the Hell Happened in 2007?” author Tom Friedman details the many contemporaneous developments of that time which transformed our world — just prior to the “Great Recession,” which changed everything the following year.
Here are the other tech developments which Tom Friedman cited (read that chapter for more detail):

* Within a year, Apple opened the development of iPhone apps to third parties, which greatly magnified the iPhone’s impact on the world. There are currently over 2.2 million apps in the App Store, 90 percent of them free. Another 6 percent cost 99 cents.
* In September 2006, Facebook (which had been confined until that time to colleges and high schools) opened itself to anyone in the world over the age of 13 with a valid email address.
* In 2007, Twitter was spun off into a separate platform and started to scale globally.
* In late 2006, Google purchased YouTube, substantially growing that service’s web presence.
*  Change.org, a petition website currently claiming 100 million users (one of the first B Corps certified by B Lab) was created in 2007.
* Google launched Android, an open-standards platform for non-Apple smartphones, in 2007.
*  Amazon released the Kindle in 2007, launching the eBook revolution.
*  Airbnb was conceived in 2007 in San Francisco.
*  In 2007, IBM introduced “Watson,” a cognitive computer combining machine learning and artificial intelligence, sparking (I suspect) the AI revolution.
*  In 2007, Intel introduced non-silicon materials into microchips, enabling exponential growth in computing power.
*  In 2007, an open-source, Java-based programming framework called Hadoop emerged which made “big data” possible. Hadoop supports the processing and storage of extremely large data sets in a distributed computing environment.
*  In 2007, an open-source software development platform called Github emerged which accelerated software development. It allows software developers to share coding so each developer doesn’t have to  re-create every module of a program from scratch.
*  In Clean Tech, 2007 saw “the beginning of an exponential rise in solar energy, wind, biofuels, LED’s, energy efficient buildings and the electrification of vehicles.”

Suggested but not included in Tom Friedman’s list, Elon Musk unveiled the Tesla Roadster in July 2006, with deliveries beginning in 2008. Its electric range of 200+ miles and 0-to-60 acceleration under 4 seconds awakened automobile manufacturers to the EV revolution, which they only now are beginning to embrace.

So, What About Real Estate?
How, you might ask, have these global transformations impacted the real estate industry? The answer is “not that much,” but let me describe how the real estate business has evolved since 2007.
For starters, the smartphone has changed our business as much as it has everyone else’s. We agents are always connected (if we want to be). With internet access in our pockets and numerous smartphone apps, we are nearly as business-enabled on the road as we would be if we carried our laptops with us. I’ve even done business with clients while on vacation in Europe and Mexico, thanks to affordable international cell and data service.
Other technological improvements have further enhanced our productivity, allowing us to better serve our clients. For example, almost all agents in our market subscribe to CTM eContracts, a fabulous service which makes it super-easy to create documents which can then be signed by clients or other agents on their computers, smartphones or tablets.
In 2013, our local multiple listing service (MLS), REcolorado.com, abandoned its in-house listing platform and subscribed to CoreLogic’s state-of-the-art platform which now serves us agents and our clients far better — and is constantly evolving. One example is that we can now set up email alerts which will notify clients within 15 minutes of a home being listed which matches their search criteria.
There has been a revolution in showing services, too. Centralized Showing Service (CSS) has contracted with all but a few metro brokerages to handle showing requests 24-hours a day, with a great website and smartphone app to match. Hopefully CSS will have 100% of brokerages on board soon, because it makes our job easier and serves sellers better than any agent or office can do by themselves.
Social media, including Facebook and Instagram, are playing an increasingly prominent role in the marketing of homes. Like many brokerages, Golden Real Estate utilizes social media to promote listings and open houses. In addition, we upload narrated video tours, including drone footage, of all listings to YouTube, which we then link to other social media, our website and the major real estate websites such as realtor.com and the Zillow group.
Every so often someone will predict that increased internet penetration will put real estate agents out of business, much like it has decimated the travel agency business. Yet, despite a proliferation of “for sale by owner” websites, we’ve observed a reduction in the number of “by owner” listings. Indeed, most “FSBO’s” end up hiring a listing agent or at least agreeing to pay a commission to buyers’ agents, realizing that there’s more to selling a home than putting a sign in the ground. Sellers need us not only for our transaction management and negotiation skills but for getting their homes the widest possible exposure (on the MLS, for starters) and having CSS manage showing requests and provide feedback.

The year 2007 has added significance for us, because Golden Real Estate was incorporated in July 2007, which means that this is our 10th Anniversary, too. Mark your calendar for Friday, July 14th, 5-8 pm, when we’ll be throwing a party in our South Golden Road parking lot with live music and good food. More details to follow, and you’re invited!


By JIM SMITH, Realtor®
Golden Real Estate is known for its sustainable practices. Indeed, we were recognized as early as 2010 with the City of Golden’s Sustainability Award for Business.
Here are some of the practices and improvements which earned us this award, plus some measures we’ve taken since 2010 to deepen our commitment to sustainability. 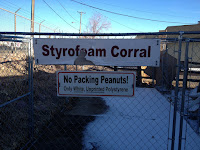 Recycling of Styrofoam: We have a “Styrofoam Corral” behind our office where anyone can drop of their block white polystyrene (aka Styrofoam, which is a brand name) 24/7.  At least once a month, we take a truckload of this material to a reprocessing center in Denver, keeping over 200 cubic yards of it out of landfills annually.

Solar Power: Our office (and my own home) have enough solar panels to power not only our office, but our electric cars. In addition, we have two ChargePoint charging stations for EV’s that are free to the public.
Reusing trash bags: I can’t remember the last time I purchased trash bags. We dump our trash and recycling materials loose into the trash carts, then reuse the plastic bags over and over again.
Super insulation of home and office: Insulation is the smartest way to save on energy — and has the biggest return on investment (ROI). By hiring GB3 Energy to do an energy audit and install basement, crawl space and attic insulation as well as caulking windows, we have significantly reduced our heating and cooling costs.

Driving electric cars:  I have driven nearly 200,000 miles on electricity in my Chevy Volt and Tesla cars. The lifetime MPG for the Volt (which has a range-extending gas engine) is over 200 mpg. Back in 2015 I drove my Tesla round-trip to Connecticut, and the only cost was the wear on my tires thanks to the free Supercharging. New Teslas don’t have unlimited free Supercharging — unless you’re referred by a current owner. Use my referral code to get a $1,000 discount and that free charging: http://ts.la/james6985.

Solatubes: The generic name for these alternatives to skylights is “sun tunnels.” (Solatube is a brand name; my favorite brand is Velux.)  By installing Velux sun tunnels in our office and at home, we use less electricity for lighting — saving us more electricity to power our automobiles!