[Published Nov. 22, 2012, in the Denver Post and in four Jefferson County weekly newspapers]


On Saturday I attended the dedication of Habitat for Humanity of Metro Denver’s 500th home, which was sponsored by Jeffco Partners for Interfaith Action.  Actually, six homes in Lakewood (two  tri-plexes) were dedicated that day, and each was allowed to claim the honor of being HFHMD’s 500th home.


In the picture is Elizabeth Ongu, after receiving the key to her new home at 1569 Chase Street. With her is her daughter, Ajuly, 7, and sons Omat, 10, and Olnar, 4. Joining in the occasion is my parrot, Flower. 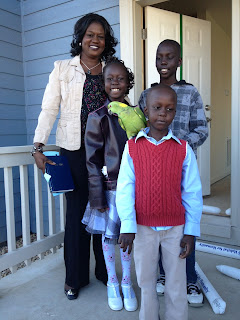 This was the 12th home sponsored by Jeffco Partners.  I am honored to serve as volunteer coordinator/webmaster for this group’s annual pumpkin patch, which is the source of most of its funding for home sponsorships. Once again, this year’s pumpkin patch netted over $25,000, which went toward building the Ongu home. Members also joined Elizabeth in the actual construction of her new home.


Habitat homeowners truly know the value of home ownership — no moving every year or two; the children no longer have to change schools repeatedly; Elizabeth’s low mortgage payment is fixed, and lower than her rent payments; and the neighborhood is safe, too. Now they have a fenced yard to call their own. They can have a dog if they want (or a bird)!


As Coloradans, we can be grateful for programs here in Colorado which make the American dream of home ownership a real possibility for those who don’t enjoy it yet..


Habitat for Humanity is only one such program. FHA still allows Americans to buy homes with only 3.5% down, and the Colorado Housing and Finance Authority, which I featured recently, will lend first-time home buyers that 3.5% down payment so they can buy a home with as little as $1,000.


We can also be thankful that we live  in Jefferson County, where we did not suffer as big a downturn as other areas of the state and country, and where we can safely say that the housing recession has passed.


Speaking as a real estate professional, I can also be thankful for some industry-specific and personal happenings or conditions, to wit:


* Metrolist, Denver’s MLS, has decided to abandon its in-house MLS platform in favor of purchasing software from a national industry leader, CoreLogic. Metrolist tried in vain to reinvent the wheel, and never really succeeded. I’m really impressed by Metrolist’s new CEO, Kirby Slunaker, who is also going to shake up the syndication of MLS data to consumer websites. I’m thankful and optimistic.


* The 2012 election is over. No more commercials, but also, hopefully, no more viral emails spreading mistruths about the 3.8% Medicare tax contained in Obamacare.


* Three metro Realtor Associations successfully completed their merger into the Denver Metro Association of Realtors (DMAR), and I’m honored (and thankful) I was elected to its board of directors.


* I’m thankful to own a solar-powered home and solar-powered office and to drive a Chevy Volt, which is powered by electricity generated from the sun. Over my 8,000 miles I’ve only had to refill my 9-gallon gas tank five times!


* I’m thankful to have wonderful broker associates — Jim Swanson, Karon Hesse, Carrie Lovingier and Kristi Brunel — working with me to serve home buyers and sellers with the highest level of integrity and environmental responsibility.