Have You Been Caught in This Rental Scam?


[Published July 2, 2015, in the Jeffco editions of the Denver Post's YourHub section and in four Jefferson County weekly newspapers]

I’ve written previously about a scam in which vacant homes for sale are hijacked by scammers and advertised “for rent” at below-market rents on craigslist. The scammers are out-of-state or in a foreign country and tell you to wire them the money and they’ll mail you the keys. Don’t believe it! 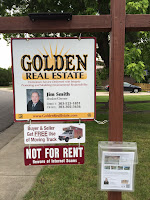 My new listing on W. Warren Drive (featured last week) was scammed in this manner, but this time it was posted on websites which charge money to post rental listings. In the past I’ve advised renters to search such websites instead of craigslist because scammers don’t want to spend money, but there’s an explanation: the scammers use stolen credit cards to pay for their fraudulent listings!
I have posted a sign rider on that listing which says “NOT FOR RENT —Beware of Internet Scams.”

On July 1st, I received a call from a woman who found my "for sale" listing after she had already wired $2,100 to the scammer. I told her that if the scammer had not yet picked up the wired funds, she could cancel the wire. She quickly called the place where she had placed the wire order and was able to cancel the wire and get her $2,100 back!  She and I both felt great!
Posted by Jim Smith at 10:37 PM