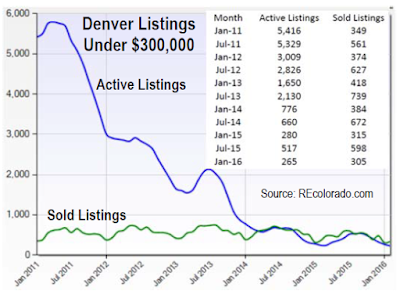 In my Feb. 4th column, I wrote about our seller’s market and included a graph similar to the one at right, except that it included all price ranges —- and those two lines showing active listings and sold listings didn’t cross.

Let's look at Jefferson County, where the result is even more dramatic. 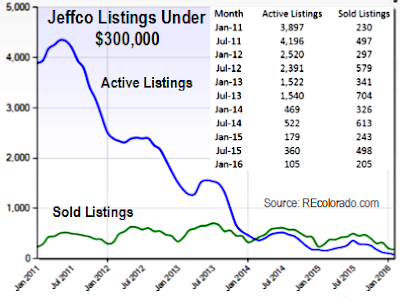 That’s how those lines are able to cross — enough new listings are added each month and enough of them sell immediately that, combined with previous listings, the month can end with more sold listings than active listings.
How much longer can this go on? It’s hard to say, but the typical listing under $300,000 is attracting 20 offers, which means there are 19 buyers who lose out and must compete for the next listing that comes along.  It will take a long, long time for those 19 buyers (plus the ones who didn’t even submit a contract) to be satisfied. And the situation is getting worse each month, not better.
It seems to me that, because of all those unsatisfied buyers and a steady decline in the number of new listings, the situation cannot improve anytime soon.
Brokers have been complaining  for three or more years about reduced inventory, but the present situation was probably inconceivable to those same brokers (including me) three years ago. Looking at that chart, it’s hard to imagine that the green and blue lines could continue their downward trend. They are already approaching zero!
Although the seller’s market is most extreme in the under-$300,000 price range, it is still strong in the higher price ranges — when homes are priced right.  Last week I featured two new listings in this space that were above that price range — one for $385,000 and another for $415,000.  The first one attracted 7 offers within three days and went under contract by Sunday for $30,000 over listing price.  The second listing attracted 11 offers and went under contract in the same time frame for almost $40,000 over listing price.
Both sellers were grateful they had someone like myself to negotiate that flood of offers, keeping them all straight and making sure that each bidder did not feel ignored.  I created an Excel spreadsheet of the offers for each home so the seller could compare not only the price but the other elements of each offer and so I myself could make good recommendations to the seller.  It also allowed me to keep each buyer’s agent informed about where they stood so their client could, if necessary and desired, improve their offer.  I was gratified that several of the agents whose buyers lost out complimented me for my professionalism in handling the multiple offers. None felt blindsided
The experience reinforced a simple lesson which I have shared before — that when it’s this easy to sell a home, the last thing you want to do is try “for sale by owner.”  You really need a professional such as myself or one of our broker associates to manage the process.  Either of my sellers would have been completely out of their depth trying to juggle that many offers and negotiate simultaneously with that many buyers and their agents.
If you missed my Feb. 18th column advising sellers and buyers on how to navigate these troubled waters, you can read it online at www.JimSmithColumns.com.