Regular readers of this column know that I have a Tesla with “Autopilot” features, and I have been asked about it recently due to the reported fatal accident using those features. 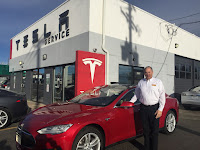 Having spent four years among the geeks at MIT, I recognize the fascination geeks have with creating self-driving cars, but as someone who uses Tesla’s Autopilot features daily, I have concluded that a future with self-driving cars is a pipe dream.

I have had to take manual control of my Tesla on numerous occasions and can not imagine software refinements dealing with such situations as:

>  Safely crossing a double yellow line to give bicyclists a safe amount of clearance: (I wouldn’t want to bike in a world of self-driving cars, would you?)
>  Avoiding rough pavement, road debris and animals;
>  Negotiating a roundabout with other drivers;
> Threading my way through a street with unpainted traffic calming islands and bump-outs;
>  Doing an alternate merge, such as onto I-25
>  Dealing with construction zones; and other situations.
It must be fun for geeks to devise solutions to such challenges, but honestly, it is not a good idea to put our lives and the lives of others in the hands of technology.
Tesla calls their self-driving technology “autopilot.” In airplanes, autopilot is a useful feature, but you don’t see the pilots abandoning the cockpit to socialize with passengers and crew. And they’re up in the sky where they rarely even see other traffic. How crazy is it on a busy highway to think that you shouldn’t keep your hands on the wheel so you can take over when the car makes a bad decision or fails to see a bicyclist or pothole?
I have noticed that on snow-covered roads Tesla’s autopilot features shut down —and for good reason.
Driver assistance is how we should be thinking about such technology. I prefer to think of these features as nothing more than enhanced cruise control
Currently there are two primary driver assistance features in the Tesla. One of them is “Traffic Aware Cruise Control.”  I love it!  It senses the speed of vehicles in front of me and slows down and even comes to a complete stop, maintaining a safe distance. The other is “Auto-Steer,” which keeps me from drifting out of my lane. Together they make driving safer and less stressful.

Published July 14, 2016, in the YourHub section of the Denver Post and in four Jefferson County weekly newspapers.