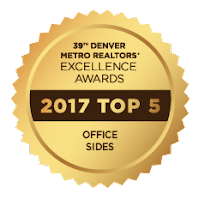 Last Thursday (April 6, 2017) at the Denver Metro Association of Realtors’ 39th annual Excellence Awards, Golden Real Estate was honored for having the third largest number of closings among brokerages with 6 to 10 agents.

Golden Real Estate’s nine agents completed 133 transactions totaling $48 million in volume during 2016. This represented a one-third increase in volume over the previous year. We were the only Jefferson County real estate brokerage honored in this category. If the award had been limited to Jefferson County, we would have been #1.