A Timely Reminder of Thomas Paine

Last Sunday, Thom Hartmann reprised his 2006 review of Thomas Paine and the Promise of America by Harvey J. Kaye. I was not familiar with that book, but it’s on my reading list now. 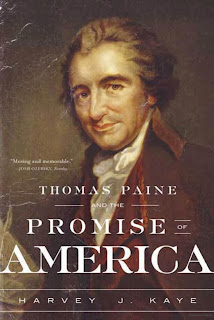 Thomas Paine was best known for his books Common Sense and The Rights of Man, which were “best sellers” during the time of our country’s founding. His undoing, according to Kaye, was a third book, The Age of Reason, which Hartmann describes as “a finely tuned attack on organized religion.” It’s never been a good idea!

Here’s an excerpt from Hartmann’s review:

¨ It wasn't FDR who first seriously promoted the progressive income tax in the USA: it was Thomas Paine.

¨ It wasn't LBJ who invented anti-poverty programs by introducing Medicare, housing assistance, and food-stamp programs: Thomas Paine proposed versions of all of these.

¨ It wasn't Jack Kennedy who first talked seriously about international disarmament: it was Thomas Paine.

¨ And Teddy Roosevelt wasn't the first American to talk about the “living wage,” or ways that corporate “maximum wage” wink-and-nod agreements could be broken up: it was Thomas Paine.

¨ Even Woodrow Wilson’s inheritance tax, designed to prevent family empires from taking over our nation, was the idea of Thomas Paine, as was the suggestion for old-age pensions as part of a social safety net known today as Social Security.

Paine thought that the best way to build a strong democracy was to tax the wealthy to give the poor bootstraps by which they could pull themselves up.

And unlike most of our “founding fathers,” Paine never owned a slave and in fact railed against the practice. That’s another reason he lost favor.