Homes Over $500,000 Are Going Under Contract Much Faster Now

Here is my monthly calculation of the percentage of inventory under contract by MLS area, county and city: 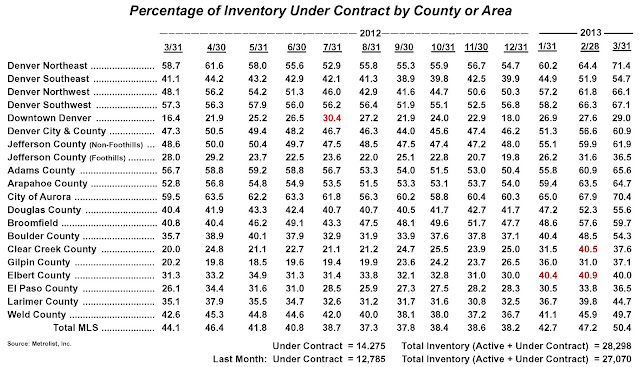 Look at the bottom two lines on this above chart.  They show that while the number of unsold homes on the MLS (what I call "total inventory") increased by 4.5% in March over February, the number of those that are under contract increased at over twice that rate -- 11.7%.   That is why the "inventory" defined by other analysts (i.e., active listings only) fell by 1.8%.  It's not that sellers aren't putting their homes on the market, it's just that buyers are snapping up listings faster than they can be added.
In the above chart, I have highlighted in red the only areas and months when the percentage of inventory under contract was higher during the past 12 months than it is now.  And notice that for the first time ever (that I know of), over 50% of the total MLS listings are under contract.
Now, look at this chart: 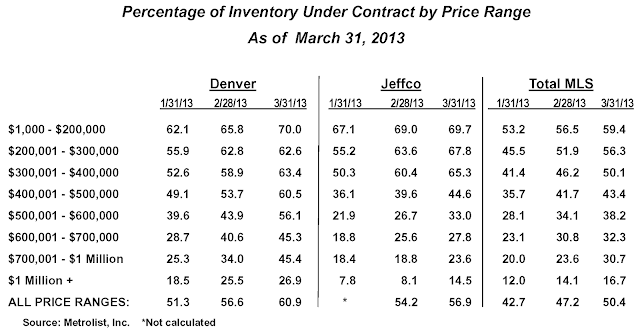 What surprises me most is the dramatic increase in buyer activity in the homes over $500,000.  The percentages in the top four price ranges have increased by nearly half, even in the very highest price ranges.  In Jeffco, the percentage of million-dollar-plus homes under contract has nearly doubled.  How much higher can these calculations go next month?  Stay tuned!
Posted by Jim Smith at 9:03 PM