With Supply of Active Listings at Record Low, Buyers Look to New Homes 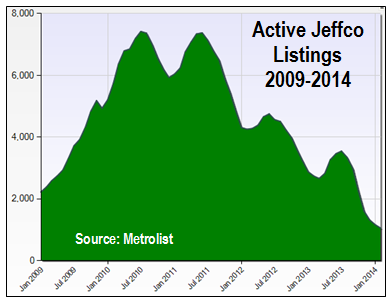 Although this chart is for Jefferson County only, the chart for the MLS as a whole and for individual sections of Jeffco looks the same, with current inventory about 50% of five years ago. The only exception is Evergreen and the foothills as a whole, where inventory is only slightly lower than 2009.


Taking note of this lack of existing homes for sale, new home builders such as KB Homes and Century Communities are gearing up as quickly as they can and drawing lots of interest from buyers who can’t find what they want in existing homes.


The builders are no longer offering incentives like they were last year, either — they don’t need to.


Last week I visited a “broker open house” at KB Homes’ new subdivision called Westwoods Mesa.  It’s at 69th & Indiana in Arvada. They are offering single-family as well as paired homes. KB is also building at Lyons Ridge in the Willow Springs area where Belleview Avenue passes through the hogbacks of Morrison.  The former orchard east of McIntyre Street north of 50th Avenue is being prepared for a new subdivision, and Leyden Rock and Candelas are seeing brisk traffic.


If you’re looking at buying a new home, here’s some advice for you.


First, don’t be unrepresented. The home builders will not give you a discount if they don’t have to pay your agent, so there’s no reason not to have professional representation. And if you register as not having an agent, they won’t let you bring an agent into the transaction later on. These builders do not use the buyer-friendly state-approved contracts required for all resale homes. Their lawyers create their own contracts which are not at all buyer-friendly, and you’ll want your agent to recommend a real estate lawyer to interpret the terms of that contract. You will not have the protections you have in resale transactions. For example, your “deposit” with the builder is not the same as the “earnest money” for a resale transaction. It is not escrowed for your protection and typically is not returned if you terminate.


Also, you’ll want to see whether a “metropolitan tax district” was created to build the infrastructure for the subdivision, which can add as much as 40% to your property tax bill for the next 30 years. The builder is not paying for those streets and sewers — you’ll pay in your property taxes.


Lastly, you’ll want to hire an inspector, just as you would for a resale purchase.  The inspectors I recommend are willing to make multiple visits during various stages of construction — very important!
Posted by Jim Smith at 11:54 PM