[Published Feb. 5, 2015, in the Jeffco editions of the Denver Post's YourHub section and in four Jefferson County weekly newspapers]

Last week I wrote about week 1 of the 3-week EcoBroker class which all nine broker associates at Golden Real Estate and I are taking.  As promised, here is my report on week 2 of the class.

I had written that this week’s class was about solar, but that was only a small segment in a class that was largely about financing energy efficiency improvements in homes.

Even now, the energy efficiency of any home you might buy can be improved. Every time  Rita and I have bought a home, we have invariably invested thousands of dollars in improving the home during our first year of ownership.  That has entailed such things as adding solar PV, installing sun tunnels (such as Solatubes), replacing incandescent bulbs with CFL’s and LED’s, and dramatically improving insulation.

What I have failed to recognize, however, is that the cost of these improvements could have been included in an Energy Efficient Mortgage (EEM) instead of paying for them out of pocket later on. For some buyers, this might well be the only way they could finance improvements that they want and which could both reduce the operating cost of their home and improve comfort and quality of life.

As a result of this week’s training, my fellow agents and I will be diligent in telling buyers about EEM’s as well as the 30% federal tax credit that applies to the improvements that can be financed by EEM’s. 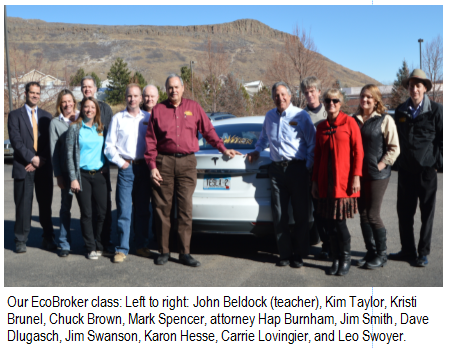 The process of getting an EEM need not take longer than getting a conventional mortgage, and the EcoBrokers at Golden Real Estate can guide you through the process. It involves obtaining an energy rating/energy audit of your home during the inspection process and developing a list of improvements, with cost estimates for each of them. The appraisal will be based not on the home “as is” but rather “as improved.” The lender would then release the money for those improvements as they are completed.

Soon I will publish a schedule of public seminars we’ll be hosting on such topics as lead-based paint, mold, radon, windows, solar — and EEMs.