Does the Assessor’s Valuation of Your Home Seem High? Here Are Some Data

[Published May 14, 2015, in the Jeffco editions of the Denver Post's YourHub section and in four Jefferson County weekly newspapers]

You’re not the only one who thought the county assessor’s math might be wrong in the percentage your home’s valuation was increased.

I don’t have the time or resources to second-guess all the assessor’s valuations, but I can at least run some statistics on the MLS and see how they compare with the Jeffco Assessor’s statement that, countywide, valuations rose 20.11% between June 30, 2012 and June 30, 2014.

REcolorado, Denver’s MLS, keeps monthly statistics, so it was easy enough to compare the average price of homes sold on those two dates and measure the increase or decrease. 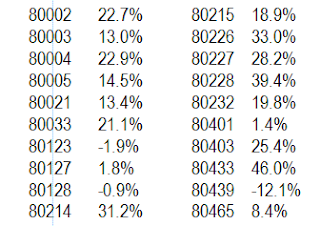 Of course, fluctuations by subareas within those ZIP Codes can vary dramatically, too.  For example, 80401 and 80403 include the foothills areas of Genesee, Golden Gate Canyon and Coal Creek Canyon, which probably varied greatly from the non-foothills areas within those same Zip Codes.
Next I researched MLS statistics comparing what certain homes actually sold for on June 30, 2014, and what the county assessor estimated that those homes should have sold for on the same dates they actually sold.
There were 84 Jefferson County homes that actually sold on June 30, 2014, and logic would suggest that, if those transactions were “arm’s length," then the price they sold at should be the price they “would” have sold at on that date.
But the assessor’s computer program does not consider when or for what price a particular property sold. Rather it applies its algorithms to that property just like any other and looks at all comps to determine the proper valuation.
Here are 19 randomly selected property that sold on that date: 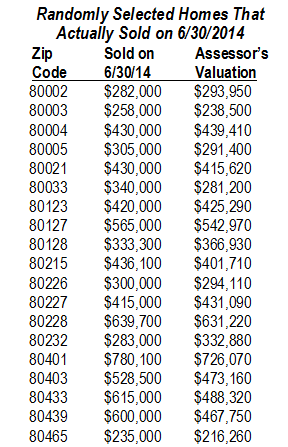 The inconsistencies between the above charts are interesting. To appeal your valuation isn’t that hard. Simply follow the instructions spelled out in last week’s column. It’s archived at www.JimSmithColumns.com or I can email it to you.