The Denver Metro Real Estate Market Is Still Hot, But It Does Vary Somewhat by Price Range


[Published Sept. 3, 2015, in the Jeffco editions of the Denver Post's YourHub section and in four Jefferson County weekly newspapers.  The last paragraph and chart did not appear in YourHub.]

Because some listings take longer to sell than others, I’m asked on occasion whether the market is cooling in a given price range. Below are some charts and tables which I created on September 1st.  There may be some closings on August 31st that weren’t reported yet, so that statistic may be higher than shown.

Also not reflected in these tables is the number of listings that have sold but not closed.  That figure, as of September 1st, is 8,394. That is about 50% higher than the number of closed sales during August, so the trend is clearly continuing upward.  Remarkably 561 of those pending sales are listed at $700,000 or more, considerably higher than the highest number of sales in that price range, which was 407 sales in June 2015.
As you can see from the right chart above, the higher priced homes are selling at an increasing pace even though the number of active listings is down. In the under-$400,000 price range, the number of sales over the last  six months has equaled the number of active listings — and there are 5,854 pending sales.
Median days on market are creeping up, as shown in the next set of tables — more so in the higher price ranges — but they still remain considerably below previous years.

The best measure of how hot the market is and how hot it will be in coming months is not a statistic that is (or can be) recorded anywhere, and that is the number of offers received on any given listing. When a home sells in 5 days or less, you can expect that there were multiple offers. I know of recent transactions in which more than 10 or even 20 offers were received. Those losing bidders are still looking, and the number of them is an indication of how long this seller’s market will last. Another unknown is the number of sales which are not even recorded on the MLS. 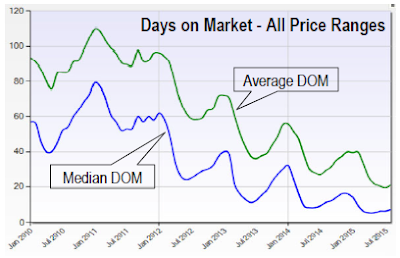 Look for even more buyers to get “off the fence” this fall as soon as interest rates start rising. There will be a surge of new buyers just as soon as the Federal Reserve begins the slow climb away from its policy of near-zero interest rates.
The last chart may surprise some people, because it shows that despite the low inventory of 2014-2015, the number of sales has risen steadily. As I have said before, it’s not that inventory is low, it’s just that it sells more quickly. 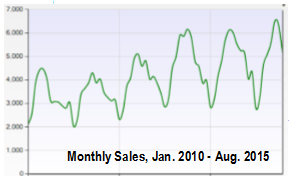