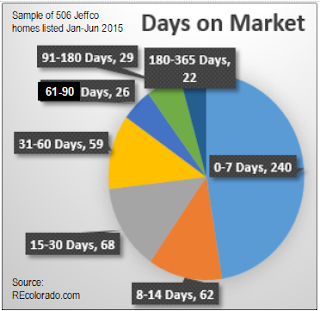 The chart at right shows how long a sampling of Jeffco homes listed during the first six months of 2015 spent on the market before going under contract.  The clock is still running for 24 of those listings which are still active.

Why does it happen that most homes sell quickly but others take so long to sell?  The simple answer is overpricing.  If a home is priced well — no matter what the price range — it can sell quickly and even attract multiple offers.  But if it is overpriced, it can sit on the market for a long, long time.

Of those 22 homes shown as on the market 180 to 365 days, only two are sold listings and four are currently under contract.  The other 16 are all still for sale. The listing (or sold) prices of those 22 listings is 91.1% of their original listing price and will probably slide further before the remaining 16 listings sell.

By contrast, those 240 listings which sold in 0 to 7 days sold for an average 101.1% of asking price.  That percentage would be even higher if it weren’t for people selling their homes too quickly.  That’s right — too quickly!

I’m referring to the homes that show zero days on market, of which there were nearly 400 in Jefferson County this year.  Many of those sellers would, by my calculation, have received an average of one to two percent more — many of them much more — for their homes if they had waited at least two or three days before accepting a contract.  Analyzing sales from January through June 2015, I found that homes which sold with zero days on market sold for an average of roughly full price, but the homes which sold in 2 to 5 days sold for an average of 101% to 102% of asking price.

I was inspired to write on this topic because this past week I sold a $335,000 listing for more than $350,000, with five competing offers. The highest offer came in on day 5 and was the result of sharing the current best offer with each prospective buyer. Fortunately, my seller understood and accepted my strategy of pricing the home at market value instead of at a premium, as so many sellers want to do.  We could have priced the home at $350,000 and maybe have attracted a buyer after a week or so, but by pricing the home at $335,000 we drew enough buyers to be selective.  The seller got the closing date he wanted and also got the buyer with the strongest financing. 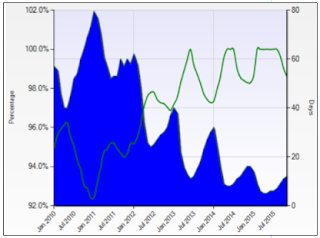 Published Dec. 10, 2015, in the YourHub section of the Denver Post and in four Jefferson County weekly newspapers