Understanding Residential Property Taxes & Why They Vary So Much

We all know that property taxes vary from state to state but they also can vary greatly right here in Jefferson County.  You have neighbors who may be paying half — or double — what you are paying each year in property taxes.

Over the years I have sold homes to families relocating from other states, and in each case they have been delighted with how low Colorado’s property taxes are compared to where they were moving from. A couple relocating from New Jersey said they had been paying $12,000 per year in property tax on a home valued under $500,000.

I’ve been told that in California residential property taxes can’t increase as long as you own your home, which can result in dramatically different property taxes on the same street based on the year of purchase.

We can be thankful that real estate property taxes here are equitable, based on actual valuation as determined by the county assessor’s computer system. Variation in property taxes is related to which taxing authorities serve each address.

Perhaps you’ll be surprised to learn that property taxes are consistently lower in incorporated cities.  That’s because the cities paid for the streets, sewers, water lines and other infrastructure and builders only have to pay to connect new homes to the sewer and water lines — what are known as “tap” fees.

When a developer acquires pasture land in an unincorporated area and wants to put homes on it, he must build the streets, curbs, sewer lines, detention ponds, etc. and may choose to build that cost into the price of those new homes.  More common, however, is for the developer to petition the county (or city, if within an incorporated area) to create a “metropolitan district” to pay for that infrastructure through the issuance of bonds.  A mill levy (property tax) is created to repay those bonds over, typically, the next 30 years.  Thus, when you buy that new home, you are paying for the construction of the home at closing, but you’ll also be paying — through your property taxes — for the cost of building the infrastructure over the next 30 years.

What does that payment, in taxes, amount to?  Let's say you buy a home worth $500,000 -- and the assessor's doesn't increase its value for 30 years.  The typical district mill levy is 50 mills.  The owner(s) of your house will pay about $60,000 to the district over the next 30 years.  (At least those property taxes are deductible!) 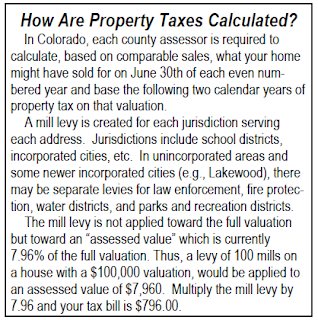 See the box at right which describes how property taxes are calculated.

Let’s say you buy a $500,000 home in Candelas, that huge multi-builder development next to Rocky Flats.  The Vauxmont Metropolitan District, which built the infrastructure there, has a 70-mill tax levy to pay off its bonds, bringing the total mill levy to roughly 170 mills.  If the county assessor assigns a value of $500,000 to your home, your property tax on that home will be about $6,800.  A home with the same $500,000 value in older sections of Arvada likely has a mill levy of 101 mills, meaning the property taxes on equivalent homes in Candelas is about 70% higher than on homes which are not in a metropolitan tax district.

In Westwoods Mesa, KB Home paid for the infrastructure, so it has only Arvada’s 101-mill property tax levy.  As a result, a home valued by the assessor at $500,000 will incur only $4,000 per year in property taxes.

You might reasonably ask why you don’t pay less for homes in Candelas since the builder doesn’t have to factor infrastructure costs into the pricing of the home.  You won’t like the answer. The answer is that buyers don’t realize the difference, and homes are priced alike whether there were infrastructure costs or not.  And that is why more and more builders are creating these tax districts when they build a new subdivision on open land. 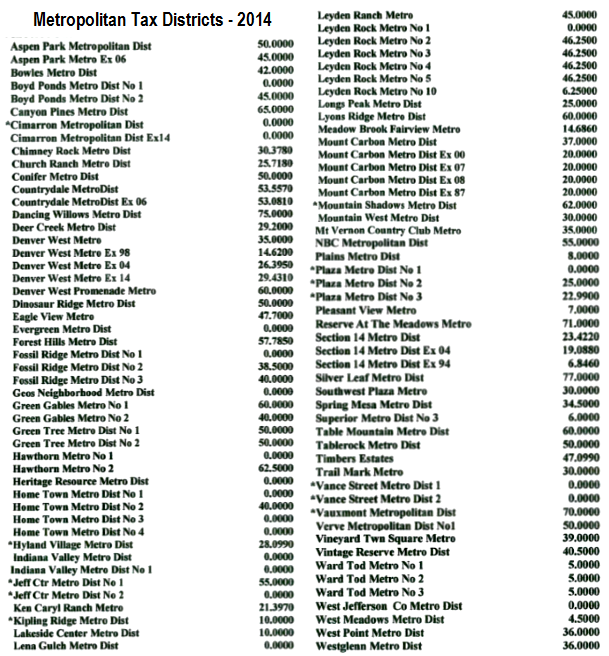 Here's the Jeffco Assessor's web page from which I extracted the above list.  You may find it more readable there.  Here's the link: http://jeffco.us/Assessor/Documents/Assessment-Process-Documents/Abstract-of-Assessments-Documents/2014-Abstract-of-Assessment/
I’m told that metropolitan districts may not pay in advance for the infrastructure but only reimburse the builder later on.  So the builder does pay upfront for the infrastructure, but he gets a lump sum reimbursement from the metropolitan district while in the process of selling the new homes themselves.  The district can charge an administrative fee.  For example, 6.25 of Leyden Rock's 46.25 mills go toward administrative costs for the district (salaries? postage?) and only 40 mills go toward repayment of the bonds with interest.

Published in more abbreviated form on Dec. 17, 2016, in the YourHub section of the Denver Post and in four Jefferson County weekly newspapers