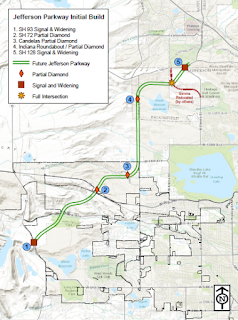 In May 2008, the Board of County Commissioners joined Arvada and Broomfield to create the Jefferson Parkway Public Highway Authority, whose purpose is to build a privately funded toll road connecting Highway 128 and Highway 93, skirting the Rocky Flats Wildlife Refuge.  Over 7 years later, JPPHA still has not found an investor, because traffic studies don’t show enough demand for it.  Meanwhile, Jeffco has contributed over $3.3 million to the JPPHA which it will never get back, and has budgeted $200,000 more for 2016.  Tell the commissioners it’s time to stop wasting taxpayer money.  Their single email address is commish@jeffco.us.

Published Jan. 7, 2016, in the YourHub section of the Denver Post and in four Jefferson County weekly newspapers