Why Did Trump’s Top Republican Critics of 2016 Become His Top Apologists?

As John Bolton and others have explained, everything the president says and does is with re-election as his primary consideration. The same is obviously true for his Republican enablers in Congress when you revisit what they said about Donald Trump in 2016, as detailed in this excerpt from chapter 7 of the best-selling book, A Warning: 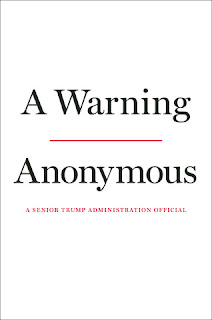 New Jersey governor Chris Christie said the candidate lacked the credentials for the nation’s highest office. “We do not need reality TV in the Oval Office right now,” Christie lamented. “President of the United States is not a place for an entertainer.”

Senator Ted Cruz lambasted him as a “narcissist” and “utterly amoral.” Cruz argued that voters could not afford to elect someone so unfocused and social-media-obsessed. “I think in terms of a commander in chief, we ought to have someone who isn’t springing out of bed to tweet in a frantic response to the latest polls.”

Representative Jim Jordan, a leading conservative and one of the founders of the Freedom Caucus in the US House, wished Republicans in Congress had acted sooner to “avoid creating this environment” that allowed someone like candidate Trump to rise.

Texas governor Rick Perry labeled Trump “a cancer on conservatism” and a threat to the nation’s future. “The White House has been occupied by giants,” Rick noted. “But from time to time it is sought by the small-minded -- divisive figures propelled by anger, and appealing to the worst instincts in the human condition.” Perry said the businessman was peddling a “carnival act that can be best described as Trumpism: a toxic mix of demagoguery, mean-spiritedness, and nonsense” and that he was running on “division and resentment.”

Senator Lindsey Graham told American voters: “This is not about who we nominate anymore as Republicans as much as it is who we are.” He bemoaned that the party had not taken the long-shot candidate more seriously. “Anytime you leave a bad idea or a dangerous idea alone, anytime you ignore what could become an evil force, you wind up regretting it.” The senator said he would not vote for the man, who he called a “jackass” and a “kook.” Those who know Lindsay understand that he wasn’t using those words lightly. He meant them.

John Thune, one of the top-ranking Republicans in the Senate, expressed reservations throughout the race, but after the Access Hollywood scandal, he said the party no longer needed its candidate. “Donald Trump should withdraw and Mike Pence should be our nominee effective immediately,” he tweeted in the wake of the scandal, with only weeks until the vote.

Many other elected conservatives chimed in throughout the campaign, calling the Republican nominee a “bigot,” “misogynist,” “liar,” “unintelligent,” “inarticulate,” “dangerous,” “fraud,” “bully,” and “unfit” for the presidency….

[South Carolina congressman Mick Mulvaney declared Donald Trump is] “[one] of the most flawed human beings ever to run for president in the history of the country”…  Roughly twenty-four months later, Mick would become Donald Trump’s third chief of staff.

Last week I wrote that readers of this column who support Trump seem reluctant to answer the question, “How do you feel that the man you support is adored by alt-right extremists, white supremacists, etc.”  Three readers responded, but none of them actually answered the question. Here are excerpts, with uncorrected spelling and grammar:

Tom H. wrote: "It seem to me your one of the left leaning Journalists, I could be wrong but!!! To answers your question: How I do I feel that Trump who I support is adored by people I consider deplorable — white nationalist, neo-Nazis, alt-right racists, and anti-semites.  First, I have absolutely no knowledge of those groups adoring Trump that you have mentioned.  I have never associated with any of those groups nor do I have knowledge of any American conservative having an association with those groups.  It seems perhaps you may have somewhat of an association with them by thinking or believing I or any conservative would.  These groups, after researching them, have very small numbers in their memberships.  My research found very little disruptive actions or behavior that even aroused the Fake News Media.  I believe your question is based on your personal hatred of Trump with no other meaning than to create your opinion and blemish the Conservative party.... Again to answer your question: It’s not the love of Trump but the love of our Country is why we love Trump."

Robert L. wrote: "I would imagine that YOU might likewise be 'adored' by people whom both you and I find not to our liking.  You, too, have little control over their liking or disliking you. I do not question you because of who likes you. Rather, I question you for developing  such an inane theory by which others are berated."

Tom B. wrote: “Your challenge to Trump supporters to justify their support of him in view of the far right extremists who also support him is a false dilemma.  One does not have anything to do with the other.  Just as support by communists and socialists and extreme leftist loonies who support Democrats does not preclude you from also doing so.  Nor does it imply that you identify with or would associate with those groups.    This is not a case of 'the enemy of my enemy is my friend.' I think that the reference to 'deplorables' by Trump and those self-identifying as such is for the most part a mocking and taunting of Hilary Clinton who was beaten by those she so insulted."