Trump’s Hostility to Obamacare Is Emblematic of His Psychopathy

From everything I’ve read and seen, Donald Trump is a profoundly insecure person, and it’s most evident in his antipathy to everything identified with his predecessor, Barack Obama.

We all saw it on day one, when he couldn’t abide the fact that Obama’s inauguration had drawn a bigger crowd than his own. That was when Kellyanne Conway introduced us to the concept of “alternative facts.”

Since that day he has been focusing single-mindedly on reversing or voiding everything with Obama’s stamp on it, and the Affordable Care Act, because of its more common identification as Obamacare, is at the top of his hit list.

What proves my point is the claim that he wants to repeal and replace it with the same provisions, notably protection against pre-existing conditions. He can’t be satisfied with amending the law, which would be far more practical than kicking millions of people off of Obamacare with only a vague promise of replacing it at some future date with a law that has the same provision.

It has been demonstrated in multiple ways by multiple former insiders that Donald Trump is only interested in himself. He’d be a pro-choice Democrat (as he was before) if that provided a path to power, but the path which opened for him was to be a pro-life Republican. He doesn’t actually care about this or any issue.

He thought he should get the Nobel Peace Prize because of his meeting with Kim Jung Un. Clearly it bothers him that Obama won that prize during his first term.

Trump had to replace NAFTA because Obama created it. Again, he couldn’t amend it, he had to replace it with the USMCA, which is only a minor tweaking of NAFTA.

He had to withdraw from the Paris Accord on Climate Change because it was Obama’s, despite the fact that virtually every other country in the world joined it, thanks to Obama's diplomacy on the topic. It goes deeper than that, however. He is a climate change denier only because Obama accepted climate change and was working to address it.  Again, he doesn't actually care about the issue.

Indeed, the failure of this president to marshal the federal government in addressing climate change will be one of his many terrible legacies which a Biden administration will need to deal with. With all the evidence of having passed the “tipping point” on climate change, it’s going to be hard. It could well be impossible after four more years of Donald Trump as president ignoring the issue.

Trump had to withdraw from the Iran nuclear deal because it was Obama’s deal. One of the biggest lies that he and his sycophants like to repeat is that Obama sent a plane-load of money to Iran to secure the deal, even though it was Iran’s own assets that had been seized and were now being released to them as part of the deal. Yes, it was dollars and was in cash, but it was Iran’s dollars.

The lies and deception put forth by Donald Trump and echoed by his supporters are astounding, but thankfully they don’t appear to be working, since Biden’s lead in the polls keeps widening. As the election approaches, the lies and distortions will probably get worse and Biden’s lead will hopefully increase as a result.

Can Americans really be fooled into thinking that Obama’s former vice president is going to foment a communist takeover of America? And forget about white supremacists — Trump won’t even disavow Qanon, with its theory that the leaders of the Democratic Party and Hollywood celebrities are a Satan-worshipping cabal engaged in child sex trafficking and drinking the blood of babies. No wonder the president is finally losing credibility except among his base who so love his racist attitudes and policies that they will accept things in him that they wouldn’t ever accept in any other human being.

Trump’s desperation, I believe, is rooted in his fear of prosecution once he is out of office.  I predict that once he finally accepts that he has lost re-election and his 2nd Amendment followers haven't created a coup, he will resign so President Pence can pre-emptively pardon him, although that would only protect him from federal, not state, prosecution. He knows that New York, among other jurisdictions, is waiting to indict him. 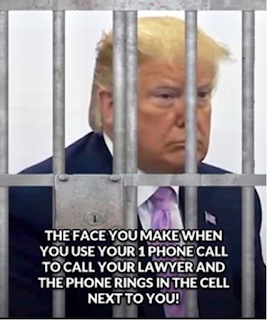