There are some great end-of-year deals to be had on new cars, but I urge you to consider the following before falling for one of those great deals.

Gas-powered cars and light trucks are obsolete. That isn’t just my opinion as the owner of a Chevy Volt and a Tesla. Every manufacturer in the world sees the writing on the wall and is rushing to introduce electric cars. Volkswagen, for one, has announced that it will introduce 30 different electric models by 2025.

The German government passed a resolution in October urging the EU to make it illegal to sell cars with internal combustion engines (ICE’s) starting in 2030. Given the size of Germany’s (and the EU’s) car market, this action will only stimulate manufacturers to ramp up their introduction of EV’s.
Any gas-powered vehicle you buy now will be hard to sell within a few years.  No one will want to buy a used ICE vehicle versus a used electric vehicle. When you buy a used ICE car, you never know which component will fail next. Will it be the transmission, timing belt, fuel pump, water pump, catalytic converter, radiator, or the engine itself? All of these components cost a lot to fix — and none of them exist in an EV. My Tesla has less than 50 moving parts (the motor has only one), and the motor and battery are warrantied for 8 years, unlimited miles.
Federal and state incentives make EV’s even more affordable than they already are — but the incentives won’t last much longer. Colorado has the most generous incentive of any state — up to $6,000, depending on price and battery size. Combined with the $7,500 federal tax credit, you get a total of $13,500 back on the purchase of, say, a $30,680 Nissan Leaf or a $33,220 Chevy Volt (my personal favorite), or the newly released $36,620 Chevy Bolt with 238 miles electric range.

Note: Colorado’s $6,000 tax credit on EV’s becomes a $5,000 instant rebate on January 1st.
You can get up to $6,000 Colorado tax credit on a used EV, but only until Dec. 31st.  The car must not have been registered in Colorado. I know several people who have purchased an off-lease Leaf from a California dealer for about $10,000 and then got about $2,400 tax credit from Colorado. (The tax credit is pro-rated based on price & battery size. You can expect to get the full $6,000 tax credit on a used Tesla which was never registered in Colorado.) You have just over a week to get this incentive, because it will not apply to used EV’s purchased after 2016. There’s a dealer in Boulder called Green Eyed Motors (888-564-3686) which specializes in selling used EV’s that qualify for the state tax credit, but I suggest comparison shopping at California dealers, factoring in the added transportation cost.
Electricity costs only 3 to 4 cents per mile; gas costs 10 to 30 cents per mile.  Xcel Energy will be introducing time-of-day rates soon, reducing the cost of nighttime electricity to just 3 cents per kilowatt-hour. Then it will only cost a penny per mile to fuel an EV, while gas costs will only go up.
Leasing an EV is a good option if you don’t have a big tax liability. The $7,500 federal tax credit may not work for you if you don’t have a big income tax liability. (Colorado will send you a check.) If that’s your situation, consider leasing an EV, because the leasing company gets the tax credits and the leasing cost is reduced accordingly. For example, you can lease a Leaf or Volt for just $199 per month, or a Tesla starting at $780 per month. 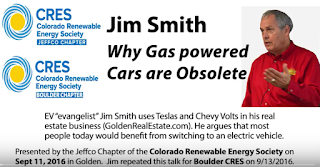 Learn more about EV’s from my PowerPoint presentation. The Colorado Renewable Energy Society shot a video of that presentation and posted it at www.GasCarsAreObsolete.info.

Published Dec. 22, 2016, in the YourHub section of the Denver Post and in four Jefferson County weekly newspapers.