Every February, Golden Real Estate is happy to co-sponsor the Colorado Environmental Film Festival (CEFF), which is held at the American Mountaineering Center at 10th Street & Washington Avenue in downtown Golden. It opens this evening, Feb. 23rd, with free screenings and the award ceremony..

Over the following two days, Feb. 24-25, you can buy a pass to see any of 16 feature films, 29 short films, and four youth films. The festival website, www.CEFF.net, gives the title, synopsis and length of each film, and when each of them will be screened.

Some feature films that caught my attention include the following: A Plastic Ocean (1:40); Between Earth and Sky: Climate Change on the Last Frontier [about Alaska] (1:20), Shifting Sands on the Path to Sustainability (0:57); We the People 2.0 [about citizen activism] (1:29); and Poisoning Paradise [about Hawaii] (0:40). Pierce Brosnan was executive producer of the Hawaii film and will be present at the screening along with the directors and will participate in a question and answer session afterwards. The still photo below is from Belo Monte: After the Flood (0:57), concerning a hydroelectric dam built on a tributary of the Amazon, which ruined the livelihood of indigenous peoples. 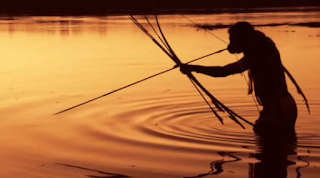 Tickets for Friday and Saturday are $18, or $36 for both days, which includes the wrap party on Saturday evening.

Between screenings you’ll want to visit the Call2Action Eco-Expo in the conference center, featuring “solutions-based organizations focused on environmental issues.” Golden Real Estate will have one of the 28 exhibitor booths. I’ll be there (when I’m not in a screening) offering free rides in my Tesla and answering questions about electric cars.

Published Feb. 23, 2017, in the YourHub section of the Denver Post and in four Jefferson County weekly newspapers.