Another new concept you’ll hear more about -- ‘Vehicle to Grid’ 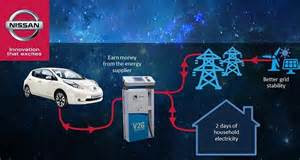 In discussing solar electricity with battery storage last week as an alternative to being “on-grid,” I neglected to mention something called V2G—Vehicle to Grid. The idea is that after you have charged your electric car from your home, you could draw upon the vehicle’s stored energy during a power failure. Another reason to own an EV!

V2G is a version of battery-to-grid power applied to vehicles.[5] There are three main different versions of the vehicle-to-grid concept, all of which involve an onboard battery:
It should also be noted that besides vehicles which have an onboard battery, vehicles without a large battery, but which connect to/recharge a battery placed at the house (for example being part of an off-the-grid electrical system or net metering system) could in effect form a vehicle-to-grid system. Even a renewable energy source (like wood gas) could be used.[7]