As We Learn How Fragile the Electric Grid Is, ‘Off-Grid’ Gains Increased Appeal

News from our hurricane-ravaged states and from the Caribbean islands can be unsettling, even to those whose life and property weren’t affected by these events. How would life be for you if you lost electricity for several weeks, or even months?

Without electricity, there is no refrigeration, and you can’t even run a gas furnace to keep warm. If you live on well water, you couldn’t run the electric well pump, so without a manual pump (which are still available) you’d be without water. Forget the internet and charging your cell phone. Gas stations wouldn’t be able to pump gas, so you’d soon lose the use of your car or at, best, find long gas lines — unless you have an electric car powered by off-grid electricity.
Even before the devastating news from Puerto Rico, I’d been considering going off-grid in my Golden home, or at least buying a Tesla Powerwall battery pack as back-up to the electricity supplied by Xcel Energy. I have enough solar panels to power my home and my cars, but when the grid goes down, my solar panels are useless. With today’s solar power systems, you’re either on-grid or off-grid. I used to like to say that the grid is my battery. Now I’m not so confident of that.  My home sends power to Xcel during the day then receives if from Xcel at night.  As long as this  give-and-take arrangement (called “net metering”) works as designed, it makes no sense to own your own battery.   But what about when it doesn’t work?
A friend and mentor of mine, Steve Stevens, has a home powered by Xcel, but also keeps a fully-charged battery pack in his garage so when there’s a black-out he can throw a switch and run his home (and charge his cars) directly from the battery pack.  His solar photovoltaic (PV) system will continue charging the battery pack during daylight hours, which is capable of providing enough electricity to live normally during the night.
I used to think such an investment was silly, but so, it could be argued, is flood insurance — that is, until you have a flood. I’m not considering flood insurance, but I am seriously considering buying “electricity insurance” in the form of a battery back-up system for my home and possibly for my real estate office.
Even a one-day power outage could spoil food in the refrigerator and freezer. Perhaps you’ve had that experience. Such a system would help to mitigate that risk.
Maybe you read, as I did, that Tesla has suspended the production of its new Tesla Semi so it can concentrate on making Powerwall units for Puerto Rico and other areas devastated by hurricanes. Presumably, Tesla is also sending the solar panels necessary to charge those battery packs.
It’s also possible to get off the natural gas grid and heat your home with electricity.   If you’re skeptical, it’s probably because when you think of electric heat, electric baseboard or “resistance heating” comes to mind.

Resistance heating involves the use of electric coils which get hot when connected to electricity. You’ll find this same level of technology in the toaster sitting on your kitchen counter – an appliance invented in 1893.  Modern electric heating, on the other hand, is accomplished by way of a heat pump.  These devices use an electric compressor to extract heat from inside your house when it’s hot (we call that "air conditioning") and extract heat from outdoors, even when it’s below freezing, to heat your home in the winter.
This kind of heat pump is called an “air source” heat pump because it extracts heat from the outdoor air. A more expensive but more efficient heat pump extracts heat from the earth, which is a constant 55 degrees once you reach six feet below the surface in our latitude.  It takes less electricity to extract heat from that 55-degree source than it does from the air, because the air can get much colder. Unfortunately, the cost of installing the vertical or horizontal wells required for a ground-source heat pump makes these systems much more expensive to install, though cheaper to operate. 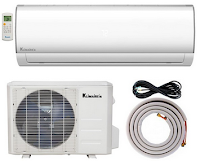 Recently I wrote about “mini-splits,” which are air source heat pumps common throughout Europe and Asia but which are just beginning to make their appearance in America. They will ultimately make our gas forced air furnaces and A/C units obsolete. They haven’t been popular here because, without using ducts, you’d require one for each room. At right is a 12,000 BTU kit that I found online for only $645. There are systems currently available that include up to four interior wall units (at the top in the image) that run off a single compressor (bottom left in the image) for under $2,000. They both heat and cool, eliminating the need for a gas furnace plus separate A/C compressor and chiller unit.

Domestic hot water can also be heated electrically using a heat pump water heater. Home Depot sells a 50-gallon Rheem model (left) for $1,199 and claims “$4,000 in energy cost savings.” It’s important to put this model in unconditioned space — or in a room with outdoor air available. The reason is that the heat pump is transferring the heat from the room into the water, so it functions like an air conditioner for the room in which it is installed. If it’s in a small room, that room can get very cold as your water gets hot! If your current furnace room has “combustion air” ducts supplying outdoor air to your gas furnace and hot water heater, those same ducts can provide the needed outdoor air when you convert to heat pumps. Just be sure to keep the door to this room closed — and not have louvered doors.
If you can also do without gas for cooking — and there are some great electric cooktops available now — you can get rid of your gas meter (saving the monthly grid connection fee) and live only off the sun.