I have written many times — and told my clients — that in a seller’s market like we are currently experiencing, you’re likely to leave money on the table if you accept the first offer, and that you should wait 3 to 4 days before deciding among competing offers.

While this “rule of thumb” was based on my personal experience, I hadn’t done the research to support it — until now.

Using data from REcolorado (the Denver MLS), I studied MLS sales for the last 180 days to create this chart. 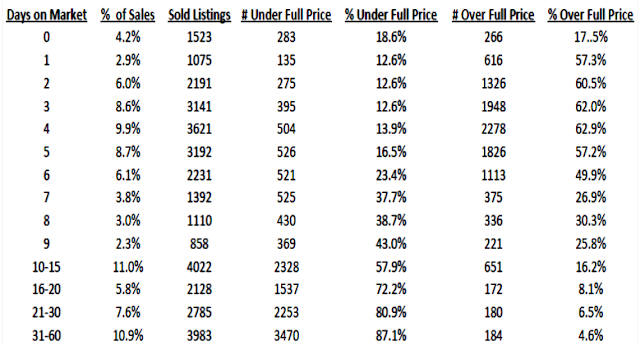 The chart shows that the highest number of listings went under contract on their fourth day on the MLS, and that 62.9% of those homes sold for over their asking price — the highest percentage on the chart. Generally speaking, homes that went under contract on days 1 through 6 (after which there is a significant drop off) performed similarly well.  Still, the analysis bore out my long-held belief that the highest numbers typically fall on days 3 and 4.
Take a good look at the numbers for homes that went under contract with zero days on market. Zero days on market (”DOM”) means that the listing agent put the home on the MLS only after it had already gone under contract. Not surprisingly, only 17.5% of zero DOM listings sold for more than their asking price — a lower figure than for listings that were on the MLS for anything under 10 days.  Also not surprising is that 18.6% of zero DOM listings sold for less than their asking price — a higher percentage than for homes that were on the MLS for 1 to 5 days.  The numbers seem clear: by denying other buyers the opportunity to even submit an offer, agents who employ this tactic are more likely to leave money on the table (specifically, their Seller’s money) because they effectively take the market right out of “seller’s market.”
Not shown on the chart is whether or not the buyers of these listings employed an agent with whom the listing agent had to share his commission, When a listing agent doesn’t share his commission, he doubles his or her earnings on that transaction. We refer to this as “double-ending” a transaction.  An analysis of the 1,523 transactions that sold with zero days on the MLS, reveals that over 50% of the listings under $200,000 were double-ended by the listing agent, while the percentage was 40% or lower on higher priced homes, and for homes priced at $1 million or higher, the percentage fell to under 10%. The number of double-ended transactions for homes that were on the MLS 1 day was about 10%, and it dropped to 5% or less for homes that sold in 2 days or longer.
Posted by Jim Smith at 9:50 PM