If You’re Into Horses, You’ll Like This Book — About My Brother 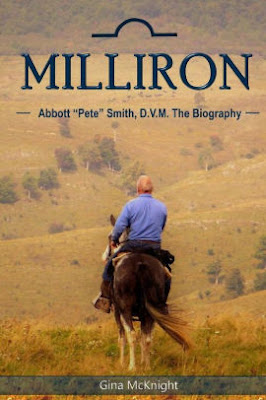 My brother, Pete Smith, was a highly respected and greatly loved veterinarian who built his own big-animal practice and clinic in Athens County, Ohio, but he earned his DVM degree in Fort Collins, at CSU in 1961.

I thought I knew Pete well, but my respect and admiration for him grew tremendously from reading this biography by Gina McKnight.

When it was announced that this book was being written, I thought it was a nice memorial to my brother, but after reading the stories of his service to clients, I realized this book would be of interest to a much wider audience — in particular anyone who loves horses and values the work of a remarkable veterinarian.
Pete’s love of horses was matched by his love of logging and sawmills. In addition to building his own clinic on his Milliron farm, he also built a lumber mill, and used the sawmill to process logs that he cut on his expansive land holdings north of Athens, Ohio. It was while he was logging by himself that he misjudged how to cut a big tree and was critically injured by it. After a month or two in intensive care, his heart gave out.

Pete had had so many near-death experiences that family members like myself didn’t take the news of his accident as seriously as we should have, but we traveled from Colorado, Sweden and Maine to attend his standing room-only memorial service. That, too, is documented in this well researched and well written book that you can buy (in paperback, $15) at www.BarnesandNoble.com. It’s a worthy tribute to my brother, but also a great read for horse lovers.