Last week I reported that our office manager, Kim Taylor, had resigned and is moving to the Western Slope. She’ll maintain a home in Golden, but will be here only half-time, so she decided to step away from Golden Real Estate. 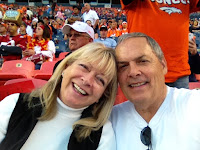 I wasn’t sure how I would replace Kim, but my dear wife, Rita, stepped right in and has assuaged any concerns I might have harbored about filling Kim’s shoes. Rita has been doing our books since we founded Golden Real Estate in 2007, and, despite being unlicensed, has a solid grasp of the real estate business.  I’m pleased to report that, just a week into her new job, Rita is already proving herself and winning rave reviews from our broker associates. (The picture is of us at a Bronco game last year.)
Her email address is Rita@GoldenRealEstate.com and her direct number is 303-277-1996.
Rita’s business for the past 30+ years has been as a consultant and director for BeautiControl, a skin care and home spa products company.  It was announced in August that BeautiControl is being shut down by its owner, Tupperware, so Rita’s own business with them is wrapping up, freeing her just in time for her new role at Golden Real Estate.  She and I are both quite excited about the possibilities!