It Couldn’t Be Clearer Now: It Was Always ‘Trump First,’ not ‘America First’ 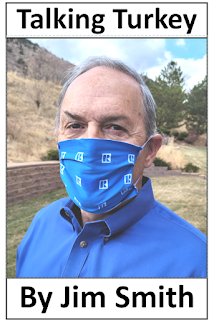 Since this is Thanksgiving week, I have to say two things — first, that I am thankful that Joe Biden is our President-Elect; and second, that “Talking Turkey” is not related to the Butterball Turkey hotline. You’re on your own, friends!

On a personal note, I am thankful for those readers who pushed my GoFundMe campaign to $11,931. That is less than the $17,000+ I paid to print this column in the Denver Post each week starting in March, but I would have gladly spent the entire amount myself if I had to, and I’m happy if this column somehow contributed to Joe Biden’s landslide win in Colorado and gave some comfort to my fellow progressives that they were not outnumbered by members of Cult 45.

Now, as Joe Biden said in his Thanksgiving address, we need to turn our attention to healing the partisan divide. But how do we do that when the president himself is sowing disbelief in our American electoral system? How will his supporters, egged on as they are by Trump, the Fox News opinionistas, OAN, Newsmax and QAnon, ever accept President Biden and Vice President Harris as legitimately elected leaders?

In 2009, the Republican leadership in Congress committed themselves to being the “Party of No” and making President Obama a one-term president. With only 2 years of Democratic control in both the House and Senate, it’s impressive that the 44th President accomplished as much as he did.

I have donated to the Democratic Senatorial campaigns in Georgia in hopes that Joe Biden will have the same advantage for at least his first two years as president.

As Chris Christie put it on Sunday, Trump’s fight to overturn the election, led so appropriately by Rudy Giuliani, is a “national embarrassment,” but more to the point, it demonstrates even to his supporters who claim to love America and the constitution, that Donald Trump has never put our country first. As John Bolton expressed in his best-selling book, every decision and every action that this president took was predicated on what was best for Donald Trump, not for the country. Click here to read psychiatrist Vincent Greenwood’s treatise demonstrating how Donald Trump exceeds the criteria of a narcissist and meets the criteria of a psychopath. Read it and weep — but weep tears of joy that he will be put out of pasture in January, ready to face $400 million in debts and countless criminal charges, especially in the Southern District of New York.

As I predicted in the past, once the man reaches the end of his “I won” rope, I believe that he will resign for two reasons. First, he can then be pardoned by Pres. Mike Pence, protecting him from federal prosecution, and, second, his fragile ego will not permit him to attend the inauguration of President Biden. He’s such an insecure child — but we already knew that, didn’t we?

From the picture of Donald Trump painted by Mary Trump, John Bolton, Anonymous and so many others, it’s so in character for Donald Trump to be acting the way he is. His supporters haven’t grasped that picture yet, but maybe this current behavior, once it has run its course, will enlighten even them.

At a closed door meeting  on April 16, 2016, Trump told Republican leaders, in effect, that the “act” he was putting on during his campaign would change once he became president. The same day, at a Pennsylvania rally, he told the crowd, “I’m going to be so presidential that you people will be so bored.”

“Promises made, promises kept”? Not that one! And the reason is simple. Immediately after his inauguration, he announced his re-election campaign and continued his “act” at rallies throughout his time in office.