Like Jimmy Kimmel, It’s Hard for Me to Understand Trump’s Larger Following

Last Friday, Jimmy Kimmel’s late night show on ABC was a re-run of his Nov. 4th show, providing his first monologue after election day, and it resonated with me for the following section, which I had to transcribe for you (emphasis added):

I’m shocked that it was this close… It is unimaginable to me that close to half of American voters saw what this man has done to this country over the last four years, how he kowtowed to Vladimir Putin, he cozied up to Kim Jung Un, he alienated us from our allies, he put children in cages, he villainized the free press, he hid his tax returns, he tear gassed peaceful protestors, he pardoned all his criminal buddies, he extorted Ukraine, he misled us about Covid, he dismantled the pandemic response team, he dismantled health care, he called neo-Nazis “very fine people,” he hired a never-ending parade of imbeciles, he lied, he lied, he lied, and then he lied some more. He’s a liar and a cheat who wants them to stop counting thousands of legitimate votes – and almost half of us are apparently okay with that.  Half of us want to keep it going for four more years. Which, listen, I don’t care what you think of Joe Biden. If Joe Biden stopped by my house every morning to key my car and pee in my pool, still there’d be no question which one of them I would vote for. None! I mean, what more would Donald Trump have to do to show us he’s insane and not fit to lead this country?  I feel like I overestimated the American people, and I underestimated the village people…

Here’s the bottom line: Donald Trump is going to serve another term.  We just don’t know whether it will be in Washington or in prison yet.

Yes, ten million more people voted for Donald Trump in 2020 than did in 2016.  Joe Biden only won because of a historic voter turnout by right-thinking Americans, but it’s still amazing that so many other Americans like this man.

As I’ve written in previous columns, many or even most of his supporters agree the man is a poor excuse for a human, but they like his policies — some because they are wealthy and it has made them wealthier, but others because he speaks to the nascent racism in them which they can’t always express outwardly, but which they can silently express with their votes. As many Trump supporters have said, “He speaks what I’m thinking.”

I have to admit that I have lived a sheltered life. I was raised in New England by parents who instilled in me that lying and cheating is not acceptable behavior. This was reinforced by the private schools I attended (on scholarship, since we were poor) for 7th grade through 12th grade, where lying or cheating could get you expelled. That is still true, I’m sure.

Having been an employer rather than an employee all my adult life, I have encountered lying and cheating, and every time it was a firing offense.

You probably have the same mentality about it. Namely, if someone lies to you once or twice, or cheats you even once, that is not forgivable. It’s a red flag reflective likely of future behavior which is simply unacceptable.

Willful lying is so offensive, even in political life, that it took a year or longer for the media to use the word. They used softer phrases like “misstated” or “was not truthful,” but hesitated to say, “the president lied.”  That’s how big a deal it was to use the word, yet now it is easily stated multiple times per day by every news organization that isn’t partisan by its charter. And even the supporters of the president must recognize some of his lies, such as when he said in October that we are “rounding the corner on the pandemic,” and that “they won’t talk about it after the election.” Here’s the corner that we were rounding as he spoke: 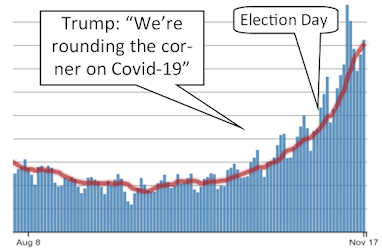