As I watched the Florida returns on Tuesday evening, I was struck by the statement that the majority of Cuban-Americans in Miami-Dade voted for Trump because they had been convinced that Biden was a stalking horse for communism, from which they had fled in Cuba.

That is such a blatant lie, which Trump has been happy to promote in his rallies, and those Cuban-Americans actually believed him.  It they and other Floridians had known they were being duped, it’s possible the state would have gone to Biden, and the election would have been over more quickly.

And that’s just one of the innumerable lies which were utilized by the Trump campaign to draw voters away from the Biden/Harris ticket. How many voters, for example, believed the QAnon line that Democratic leaders like Clinton and Pelosi were part of a Satan-worshipping cult that engaged in pedophilia and drank babies’ blood?

In such a close election, any one lie that is believed by lots of people can make a difference, and the Trump campaign convinced millions of followers of so many lies that one wonders how poorly the president would have done without engaging in any of those lies and if the Russians and other hackers hadn’t spread multiple lies in 2016 as well as this year.

It’s time to realize that our country was suckered in by one of the greatest con men of all times. If you haven’t watched Frontline’s program, “The Choice 2020: Trump vs. Biden,” you can view it free online.  His niece, Mary Trump, describes him as a con artist on that program and in her best selling book, Too Much and Never Enough: How My Family Created the World’s Most Dangerous Man.

For that matter, the same picture of Trump was painted by Frontline in their program four years ago, “The Choice 2016: Trump vs. Clinton” (also available to view free online), but it wasn’t enough to counter the big con that won Trump the presidency.

The biggest con, of course, still being played by Trump, is that he’s a successful businessman and great deal maker. It’s simply not true. His business life it littered with failures, including multiple bankruptcies. Mark Burnett can be credited (or blamed) with creating the false mystique about Donald Trump, who was, in fact, rescued from failure by “The Apprentice.”

Now that the campaign is over, it’s useful and appropriate, I believe, to take stock of what we have all witnessed ever since Donald Trump and Melania came down that gold escalator in June 2015. (Did you know that those people in the Trump Tower atrium were in fact extras paid $50 each to be there and cheer him on?) 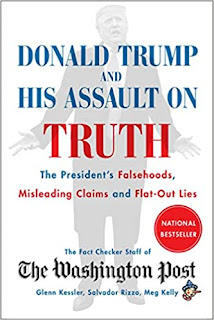 There are plenty of books written by persons in a position to know which can educate Americans about the big con. The “bible” would have to be the book published earlier this year by the Fact Checker staff of The Washington Post: Donald Trump and His Assault on Truth: The President’s Falsehoods, Misleading Claims and Flat-Out Lies.

Speaking of The Washington Post, I’d like to acknowledge how all the mainstream media have stayed true to their professional standards throughout these years of being ridiculed and called “the enemy of the people.”

One book which really portrays that experience is Jonathan Karl’s best seller, Front Row at the Trump Show.  Karl has known and covered Trump longer than any other White House correspondent, including back when he was a rising real estate developer in New York City. As a journalist myself, I enjoyed his perspective, including his criticism of some other correspondents who strayed, but rarely, from journalistic standards and ethics. If you are intrigued by the role of journalists, I heartily recommend Karl’s book.

Another writer who I recommend is Heather Cox Richardson, a professor of history at Boston College, who writes a nightly newsletter called “Letters from an American.” Visit https://heathercoxrichardson.substack.com/subscribe