Trump’s #1 ‘Accomplishment’: Getting Americans to Trust Putin and Russia

Before I started this separate column on politics, I would occasionally get political in my page 3 real estate column. One such column was published on Nov. 15, 2018 with the headline, “Yes, the Russians Wanted Trump Over Hillary, But Their Real Goal Is to Divide America.”

Another column, published on Feb. 27, 2020, carried the headline, “Why Wouldn’t the Russians Want Trump Re-Elected? Look at His Accomplishments.”

Vladimir Putin found a willing co-conspirator in Donald Trump, and our country will keep paying the price up to and after this fall’s election. As John Bolton, Trump’s longest serving National Security Advisor, has said, Putin thinks he can “play Trump like a fiddle.” As Mary Trump, a clinical psychologist, has explained, the president’s obvious-to-all narcissism is what made him such a willing and eager victim of any foreign despot who wanted his compliance. The key that unlocks the president — simple flattery.  “We fell in love,” Trump said of Kim Jong-un, the North Korean dictator.

While the President has demeaning nicknames for his opponents (like “Sleepy Joe” and “Lyin’ Ted Cruz”) and even for our European allies, he has no such nicknames for most dictators and has never, that I can recall, said anything negative about Putin.

Others in a position to speculate, if not know, believe that Putin “must have something on Trump.” It may be as simple as financial greed, because it has been revealed that Trump was working to secure a deal for Trump Tower Moscow right up until he was elected, and he probably doesn’t want to endanger that possibility when and if he leaves office by alienating Putin while still president.

More sinister theories are that Putin has salacious video footage of Trump with two prostitutes (set up by Putin, of course) in the Moscow Ritz-Carlton presidential suite where Trump stayed during the Miss Universe event in Moscow. If true, you can understand that Trump would do anything not to have that video released.

Recently, I’ve gotten to know James Tolley, who is working hard to educate Americans about “Active Measures,” a Soviet-era technique used to destabilize a country from within. His website is www.peaceful.ly.

It spells out the methodology to which I was referring in my Nov. 15, 2018 column. To quote Tolley, “This process is also called “ideological subversion,” a decades-long process to use ideology, front groups, disinformation, social engineering, and psychological warfare in order to demoralize and split a society into competing factions. These factions are then brought into ever-increasing power struggle with each other… Political power struggles are escalated into physical power struggles, with the goal of destabilizing a country. After a country has been destabilized, a crisis is manufactured. This crisis allows for the reshaping of the institutions of society. The people, tired of crisis and chaos, demand that anyone, even a fascist government, create order at any cost, including the loss of freedoms, rights, surveillance, and the installation of an authoritarian regime. The savior is delivered, which the people are convinced to accept wholeheartedly. Finally, a new “norm-al” is installed, where the people have no real rights and are controlled through violence and intimidation.” 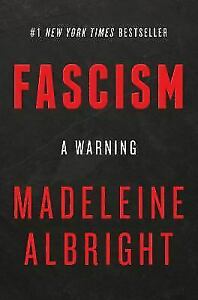 I am reading former Secretary of State Madeleine Albright’s best-selling book, Fascism: A Warning. I recommend it. As a Jew who fled Hitler’s Germany as a kid, Albright knows the topic.  Currently a professor at Georgetown University, the book is academic in its approach to the topic, describing how multiple Fascist leaders (Mussolini, Hitler, et al.) rose to power, and how Donald Trump is following in their tradition.  It's a very scary book which needs to be taken seriously.  Here's an excerpt from the review on eBay:

Albright outlines the warning signs of fascism and offers concrete actions for restoring America's values and reputation. There is priceless wisdom on every page. Albright [has] serious credibility on the subject. She witnessed the evils of Fascism firsthand, as her book movingly chronicles. And she effectively makes the case: pay more attention to the signals, subtle and strong. A lot more, Fascism [is] the work of a woman who knows authoritarianism when she sees it. And she sees the seeds of it not only in a slew of leaders hell bent on subverting democratic norms--Turkey's Erdogan, Venezuela's Maduro, Hungary's Orbán, and others--but also in Donald Trump, whom she calls in the book 'the first antidemocratic president in modern U.S. history.', Fascism: A Warning is dedicated to victims of fascism, but also to "all who fight fascism in others and in themselves". Mrs Albright has earned the right to that ambitious mission statement. At a moment when the question "Is this how it begins?" haunts Western democracies, she writes with rare authority.... [Yet] if her learning is to be expected, her way with words is a happy surprise, as is her wisdom about human nature. Free of geopolitical jargon, her deceptively simple prose is sprinkled with shrewd observations about the emotions that underpin bad or wicked political decisions."