What is Fascism, and Why Has It Become a Topic of Interest in This Election?

As Americans, we have long held ourselves to be immune from the terrible trauma experienced in Italy under Mussolini and in Germany under Hitler.  Our free press and educated population would surely prevent the rise of a fascist government. It could never happen here. Or could it?

Well, former Secretary of State Madeleine Albright’s best selling book, Fascism: A Warning, got America (and me) thinking about the topic.

So I ordered a second book on the topic, which I just finished reading and strongly recommend to those who want an understanding of how fascism can indeed take root in our free and democratic society.

The book is How Fascism Works: The Politics of Us and Them, by Jason Stanley, a scholar of philosophy and propaganda who had written a prior book with the title How Propaganda Works. 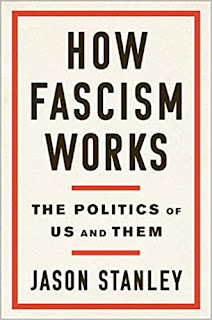 This book was written in September 2018 but has been reissued in paperback this year with a new preface, containing this comment:

“I wrote this book as a warning about fascist politics, essentially the danger of rhetoric that encourages fear and anger as a means to foment ethnic and religious division, seeping into public discourse. Today, the effects of such talk seem clear, as that rhetoric now shapes the outcome of elections and makes its way into policies.”

I find it hard to believe that our current president would knowingly choose to follow the path of fascism, but it’s definitely worth noting that his formula for success aligns perfectly with that pursued by European fascists.  Here are just a few of those elements that you’ll read about in this essential book:

Chapter One is titled “The Mythic Past.” Fascist politics begin with invoking a past that exists only in the minds of those who are frightened by changes in society. From the beginning, “Make American Great Again” triggered for me the question of when that was. Was America great in the era of slavery, civil war and failed reconstruction? Was it great before women won the right to vote? Was it great before the Civil Rights and Voting Rights Acts? Was it great before the Clean Air Act and Clean Water Act began to reverse the degradation of our environment.  (Remember Los Angeles' air pollution, our "brown cloud" and Love Canal?)  What America do the folks wearing MAGA hats want to return to?

The answer is made clear by what they fear. They fear the dilution of their white bloodline by black and brown populations. They have heard statisticians tell us that the United States is moving toward a “majority minority” population, and that frightens them.  This, you'll read, is central to the rise of fascism. In Germany it was the Jews; in American it's hispanic immigrants and blacks.

People fear the unknown. Rural voters are most susceptible to fearing an “invasion” of black and brown men because they have only the experience of watching news reports of crime and rioting, which their favored news sources are happy to feed them, even using archival footage when no current footage is available.  (An African-American colleague of mine is the father of an infant daughter, and he's glad she's a girl instead of a boy because of how much worse and more dangerous is the experience of an African-American boy growing up in America.)

Patriarchy is a key element. Fascist politics play on feminism as destructive of the mythic past which its proponents emphasize. And fear by men of their women and children being molested by those black and brown immigrants is most powerful. Echoes ring in our head of Trump’s announcement in 2015 choosing to focus on Mexican immigrants being rapists. The author calls this “the politics of sexual anxiety.”

The threat of communism/socialism is a common element in the growth of fascism.  Portraying progressive democratic programs as "socialist" or "communist" can suffice to fill people who already feel insecure financially with fear and anger.  Sound familiar?

Fascist politics always involves discrediting of media and scientists. At its heart, fascism is anti-intellectual. If the reality doesn’t serve your purpose, demean it as being elitist and fake.

As I read Stanley’s excellent text, I came to the realization that the fascist politics we are witnessing now, which found a useful idiot in our current president, is truly the result of the success of liberal democracy. Fascism wasn’t a threat in the 1950s of segregation and homophobia. Today, with same sex marriage legalized, the #MeToo movement supercharging feminism, the Black Lives Matter movement acquiring greater power due to its more popular white following, all this makes it quite easy for someone like Trump, a former pro-choice Democrat, to discover right-wing beliefs to be more effective for his personal advancement. And it should be noted that Qanon’s bizarre conspiracies feed right into that role.

Here's the table of contents of Stanley's book: 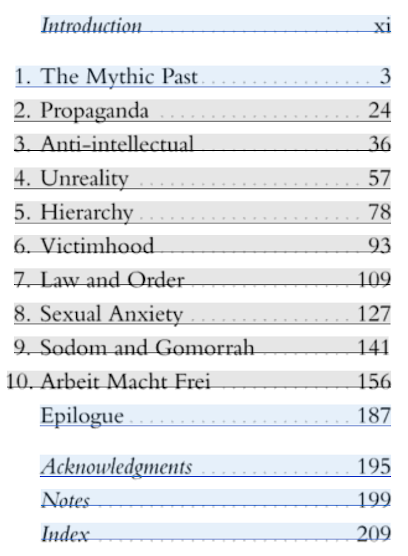